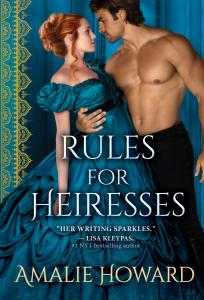 Amalie Howard whisks you away with a historical romance full of drama, true love, and the perfect happily ever after.

Born to a life of privilege, Lady Ravenna Huntley rues the day that she must marry. She's refused dozens of suitors and cried off multiple betrothals, but running away—even if brash and foolhardy—is the only option left to secure her independence.

Lord Courtland Chase, grandson of the Duke of Ashton, was driven from England at the behest of his cruel stepmother. Scorned and shunned, he swore never to return to the land of his birth. But when a twist of bad luck throws a rebellious heiress into his arms, at the very moment he finds out he's the new Duke, marriage is the only alternative to massive scandal.

Both are quick to deny it, but a wedding might be the only way out for both of them. And the attraction that burns between them makes Ravenna and Courtland wonder if it'll truly only be a marriage of convenience after all...