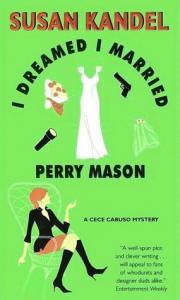 I Dreamed I Married Perry Mason (A Cece Caruso Mystery #1)

I Dreamed I Married Perry Mason is the debut novel in a hip, sexy, smart and, yes, cozy mystery series with a great hook. Think Sex and the City collides with Murder, She Wrote.

All that writer Cece Caruso really wants to do is complete her biography of mystery legend Erle Stanley Gardner, find a vintage 1970s Ossie Clark gown to add to her collection, and fix the doorknob on her picturesque West Hollywood bungalow. Then a chance visit with a prison inmate who knew Gardner lands her right in the middle of a 40–year–old murder and another case where the blood is still warm. In fact, Cece finds the body. This brings her into irresistible contact with her inner personal sleuth and shows how crime and greed can reverberate through several generations of a single family.


The Ross Thomas Award for the Best First Line in a Mystery or Thriller #8, July 2005: “What a pity my vintage Maud Frizon pumps didn't come with steel-reinforced toes.”


“I Dreamed I Married Perry Mason…is a delightful debut by Susan Kandel introducing Cece Caruso, a writer who specializes in biographies of mystery writers. Her current subject is Erle Stanley Gardner and the discovery of a letter to Gardner from a man who claims innocence of the murder charges that imprisoned him leads Cece into the investigation of a thirty year old crime. Plenty of humor and facts about Gardner keep this mystery moving.”
—MLB News


“Cece Caruso is the new girl on the mystery block, and is she ever a hoot. She has a closet full of vintage dresses by the like of Agnes B. and Pucci, as well as a collection of shoes and accessories fit for any West Hollywood diva, which is what she is. … She makes a living writing biographies of famous mystery authors of the past, which brings us to the story of I Dreamed I Married Perry Mason. Working on a book about Earle Stanley Gardner, she uncovers a ‘real’ murder mystery that he was asked to take on but remains unsolved. …Along the way we learn quite a bit about Gardner, his books and his history in Ventura. Susan Kandel has clearly done her research, and her informed perspective makes for lively reading. But it’s Cece and her magnificent wardrobe that give the book its special flavor.”
—Rocky Mountain News


“Kandel demonstrates an equally sharp eye for dramatic plot twists and creative outfits (‘Did I dare don a snood?’). With a well-spun plot and clever writing (‘The only thing about me that’s a size six is two-thirds of one foot’), this quick clip of a novel will appeal to fans of whodunits and designer duds alike. A-.”
—Entertainment Weekly


“All former Jersey beauty queen Cece Caruso really wants to do is finish her biography of Erle Stanley Garnder, ‘Creator of the brilliant, unflappable Perry Mason,’ but in art journalist Kandel’s entertaining, often witty debut, she must contend with a few distractions, including murder…readers should give Cece a warm welcome to the legion of perky female sleuths.”
—Publishers Weekly


“Thumbs up to newcomer Kandel’s series for its snappy dialogue and carefully worked-out plots.”
—Kirkus Reviews