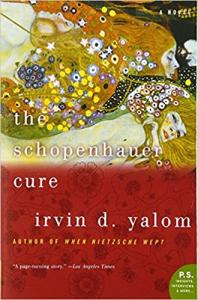 Suddenly confronted with his own mortality after a routine checkup, eminent psychotherapist Julius Hertzfeld is forced to reexamine his life and work -- and seeks out Philip Slate, a sex addict whom he failed to help some twenty years earlier. Yet Philip claims to be cured -- miraculously transformed by the pessimistic teachings of German philosopher Arthur Schopenhauer -- and is, himself, a philosophical counselor in training. Philips dour, misanthropic stance compels Julius to invite Philip to join his intensive therapy group in exchange for tutoring on Schopenhauer. But with mere months left, life may be far too short to help Philip or to compete with him for the hearts and minds of the group members. And then again, it might be just long enough.


“Yalom, a psychiatrist and author of a best-selling textbook on group psychotherapy, has fashioned a slick braid: strands of Schopenhauer’s troubled biography, a twirl of philosophical apologia from Epictetus to Nietzsche, and real-time psychotherapy sessions in which the reader feels voyeuristic, titillated….in its unraveling, the sending up of Hertzfeld reveals Schopenahauer’s relevance today and Yalom’s brilliance as a storyteller.”
—Seattle Times

“Yalom works us toward the inevitable – and unusually moving – psychological breakthrough in convincing, fascinating steps. Admirably lucid with concepts, he is transcendent when it comes to emotional particulars.”
—San Francisco Chronicle

“I…admired the grace of Yalom’s writing, the courage with which he critiqued and laughed at himself, the elegance of his insights into obsession, guilt, anxiety and sorrow, and his ability to uncover the sometimes hard-to-find humanity in his characters….Considers the value and limits of therapy and those points at which philosophy and psychology converge.”
—Washington Post

“A highly distinct brand of fiction….Unlike novelists who disclaim any extra-literary motives in writing fiction, Yalom’s aims are unabashedly educational. Contrary to a widely held misconception, “educational” can mean interesting. Yalom’s enthusiasm is contagious, and his knack for presenting complex ideas and theories in clear, engaging prose makes him a popularizer in the finest sense. And he certainly knows how to tell a page-turning story.”
—Los Angeles Times

“Yalom continues his fictional traversal of philosophy and psychotherapy with this beautifully wrought tale of a therapy group's final year... a moving debate about the end of life-- a debate doubly rooted in fictional experience and philosophical wisdom."
—Kirkus Reviews

“His re-creation of a working therapy group is utterly convincing.”
—Publisher’s Weekly

“As a novel of ideas, this book effectively explores loss, sexual desire, and the search for meaning.”
—Library Journal