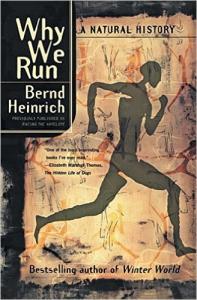 Why We Run: Natural History

Originally published as Racing the Antelope: What Animals Can Teach Us About Running and Life.

In 1981, Bernd Heinrich, a lifelong runner, decided to test his limits at age forty-one and race in the North American 100-Kilometer Championship race in Chicago. To improve his own preparations as a runner, he wondered what he could learn from other animals--what makes us different and how we are the same--and what new perspective these lessons could shed on human evolution. A biologist and award-winning nature writer, he considered the flight endurance of insects and birds, the antelope's running prowess and limitations, the ultraendurance of the camel, and the remarkable sprinting and jumping skills of frogs. Exploring how biological adaptations have granted these creatures "superhuman" abilities, he looked at how human physiology can or cannot replicate these adaptations. Drawing on his observations and knowledge of animal physiology and behavior, Heinrich ran the race, and the results surprised everyone--himself most of all.

In Racing the Antelope, Heinrich applies his characteristic blend of scientific inquiry and philosophical musing to a deft exploration of the human desire--even need--to run. His rich prose reveals what endurance athletes can learn about the body and the spirit from other athletes in the animal kingdom. He then takes you into the heart of his own grueling 100-kilometer ultramarathon, where he puts into practice all that he has discovered about the physical, spiritual--and primal--drive to win.

At once lyrical and scientific, Racing the Antelope melds a unique blend of biology, anthropology, psychology, and philosophy with Heinrich's passion for running to discover how and why we run.