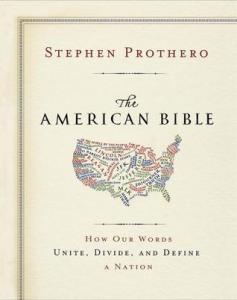 The American Bible: How Our Words Unite, Divide, And Define A Nation

The New York Times bestselling author of Religious Literacy and God Is Not One presents a provocative crash course in the great “American scriptures”—those texts that have both divided and defined our understanding of what it is to be American. Stephen Prothero gives readers an exciting and user-friendly introduction to American cultural history in The American Bible. Highlighting the touchstones of our collective cultural legacy, from Thomas Paine’s Common Sense to Maya Lin’s Vietnam Veterans Memorial; from the speeches of Abraham Lincoln, Martin Luther King Jr., John F. Kennedy, and Ronald Reagan to the novels of Mark Twain and Ayn Rand, and beyond, Prothero’s stirring and provocative handbook peels back the curtain on the inner workings of what makes America tick.

Reviews:
“The book should be required reading just for putting in one place so many historic pieces that are more opined over than actually read…Awesome scholarship to an admirable purpose.”
—Kirkus Review (starred)


“Prothero deftly balances the debate between religious and secular voices…the book’s greatest strength lies in this neutrality, offering commentaries from both sides of the discussion – all enlightening, encouraging, and frustrating in equal measure."
—Publisher’s Weekly