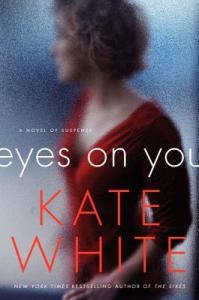 From New York Times bestselling author Kate White comes a riveting psychological suspense in which a media star must battle a malevolent enemy who may be disturbingly close to her.

After losing her on-air job two years ago, television host Robin Trainer has fought her way back and now she’s hotter than ever. With her new show climbing in the ratings and her first book a bestseller, she’s being dubbed a media double threat.

But suddenly, things begin to go wrong. Small incidents at first: a nasty note left in her purse; her photo shredded. But the obnoxious quickly becomes threatening when the foundation the makeup artist uses burns Robin’s face. It wasn’t an accident—someone had deliberately doctored with the product.

An adversary with a dark agenda wants to hurt Robin, and the clues point to someone she works with every day. While she frantically tries to put the pieces together and unmask this hidden foe, it becomes terrifyingly clear that the person responsible isn’t going to stop until Robin loses everything that matters to her . . . including her life.

Reviews:
“With pop culture references and attention to fashion detail, White keeps the story both timely and engaging. It's her devious mind, however, that puts the thrill in this thriller.”
—Publishers Weekly


“Former Cosmo editor White, author of the Bailey Weggins series, seems to thrive in an atmosphere of glitz, as she produces increasing levels of suspense and danger in what is her most compelling and snappiest stand-alone yet.”
—Booklist


“She’s dazzling but relaxed, with a full, frequent laugh. She is the Bill Clinton of Cosmic, the charming influential American, the unofficial boss of bosses, toward whom her international counterparts gravitate.”
—The New York Times Magazine