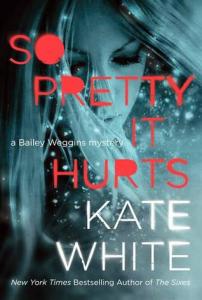 So Pretty It Hurts: A Bailey Weggins Mystery

True-crime journalist and sassy amateur sleuth Bailey Weggins has scarcely begun her hard-earned weekend getaway when something comes up: a dead body, belonging to one of the world’s most glamorous supermodels. Now Bailey’s trapped at an upstate New York home amidst the glitterati—and any one of them could be a murderer. She’s determined to find out who’s responsible, but her investigation could provoke the killer into striking again… From Kate White, the New York Times bestselling author of Hush and the editor-in-chief of Cosmopolitan magazine, So Pretty It Hurts is an addictive addition to the Bailey Weggins mystery series, and the book that fans of If Looks Could Kill, Over Her Dead Body, and Lethally Blond have been waiting for.


“After two stand-alones from White, it’s good to have Bailey back in her sixth outing (after Lethally Blond, 2007). She’s a smart, sexy sleuth with a growing fan base.”
—Booklist


“Entertaining. . . . A fast-paced insider look at the seedy underworld of fame. Fans of the series and readers who love tabloid drama will be enthralled.”
—Publishers Weekly