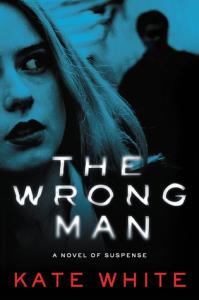 She wanted to be more daring, but one small risk is about to cost her everything—maybe even her life.

Bold and adventurous in her work as owner of one of Manhattan's boutique interior design firms, Kit Finn couldn't be tamer in her personal life. While on vacation in the Florida Keys, Kit resolves to do something risky for once. When she literally bumps into a charming stranger at her hotel, she decides to make good on her promise and act on her attraction. But back in New York, when Kit arrives at his luxury apartment ready to pick up where they left off in the Keys, she doesn't recognize the man standing on the other side of the door. Was this a cruel joke or part of something truly sinister? Kit soon realizes that she's been thrown into a treacherous plot, which is both deeper and deadlier than she could have ever imagined. Now the only way to protect herself, her business, and the people she loves is to find out the true identity of the man who has turned her life upside down. Adrenaline-charged and filled with harrowing twists at every turn, The Wrong Man will keep readers riveted until the final page.

Reviews:
“White manages to successfully pull off writing another edge-of-your-seat thriller with her newest novel, The Wrong Man, which keeps the reader enthralled until the very last page. This mystery never fails to keep action flowing, but even if it seems as if something stalls, White successfully manages to swoop back in with a new chapter and something else to bring the reader’s attention right back in. This book is impossible to put down until the surprising twist ending.”
—Mystery Reviews


“ Kit makes for an intriguing heroine who holds her own.”
—Kirkus Reviews


“New York City interior decorator Kit Finn, the heroine of this absorbing novel of suspense from bestseller White (Eyes on You), has a one-night fling with Matt Healy, a man she meets at the end of her vacation on Islamorada in the Florida Keys. Then, on her way to the Miami airport, Matt calls to invite her to dinner at his Manhattan apartment. When Kit arrives for their date, the door is opened by a stranger who claims that he's Matt Healy, who's as surprised to see her as she is to see him. Kit resolves to find out why the man she met in Florida used someone else's identity, and what his motivation was for luring her to an apartment not his own. Her pursuit of the answers is fraught with danger to her coworkers, her business, and most especially herself. Kit doesn't know whom to trust or where to turn as the plot builds to an exciting, well-executed conclusion.”
—Publishers Weekly