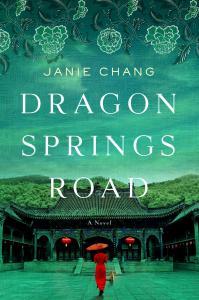 From the author of Three Souls comes a new novel set in early-twentieth-century Shanghai, where, as an ancient imperial dynasty collapses, a new government struggles to life and two girls one a Eurasian orphan, the other a daughter of privilege are bound together in a friendship that will be tested by duty, honour and love.

Abandoned in the courtyard of a once-lavish estate outside Shanghai, seven-year-old Jialing learns she is zazhong Eurasian and thus doomed to face a lifetime of contempt from both Chinese and Europeans. The Yang family, new owners of the estate, reluctantly take her in as a servant. As Jialing grows up, her only allies are Anjuin, the eldest Yang daughter, and Fox, an animal spirit who has lived in the courtyard for more than 300 years. But when a young English girl appears and befriends the lonely orphan and then mysteriously vanishes Jialing s life takes an unexpected turn and gives her hope of finding her long-lost mother.

Instead, Jialing finds herself drawn into a murder at the periphery of political intrigue, a relationship that jeopardizes her friendship with Anjuin and a forbidden affair that brings danger to the man she loves. Ultimately, she learns that for years Fox has been preparing her for a very different sort of fate . . . should she choose to accept it."

Reviews:
“Janie Chang has a keen eye for detail and infuses them throughout this magical story, with its masterfully rendered setting of the early Chinese republic, characters who bring to life the constrictions of those girls, and a mystical benevolent spirit. The result is enchanting.”
— Shilpi Somaya Gowda, author of Secret Daughter and The Golden Son

"Chang unfurls this intriguing story—set against the chaotic backdrop of China in the early twentieth century—with precision. Rich with detail and a fascinating interplay between the spiritual and earthly realms, Chang’s second novel explores whether it is possible to overcome your past."
—Booklist


“Janie Chang’s second novel is a remarkable read, brimming with magic and the grit of realism…With this novel, Chang asserts herself as an exciting, relatable voice in Canadian fiction, a voice that requires us to re-examine our relationships to place, identity, and ancestry. While Jialing’s story unravels at the turn of the century, it is, without a doubt, a story for our times.”
—Quill & Quire