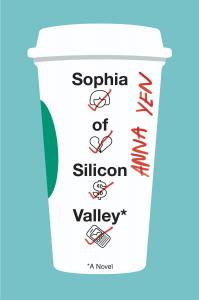 Sharp, dramatic, and full of insider dish, Sophia of Silicon Valley is one woman’s story of a career storming the corridors of geek power and living in the shadow of its outrageous cast of maestros. In the spirit of Primates of Park Avenue, and Bond Girl arrives this fast-paced, satirical novel based on the author’s own experiences.

During a time when technology companies are becoming household names, incorrigibly frank Sophia Young lucks into a job that puts her directly in the path of Scott Kraft, the eccentric CEO of Treehouse, a studio whose animated films are transforming movies forever. Overnight, Sophia becomes the unlikely nerd whisperer, and, whether attained through dumb luck, savage assertiveness, insightful finesse (learned by dealing with her irrational Chinese immigrant mother), or a combination of all three, in her rarified position she finds she can truly shine.

As Scott Kraft’s right-hand woman, whip-smart Sophia is in the eye of the storm, sometimes floundering, sometimes nearly losing relationships and her health, but ultimately learning what it means to take charge of her own future the way the men around her do. But when engineer/inventor Andre Stark hires her to run his company’s investor relations, Sophia discovers that the big paycheck and high-status career she’s created for herself may not be worth living in the toxic environment of a boys-club gone bad.

Reviews:
“A fun, fast-paced story about what it's like being a woman in the male-dominated world of tech, Sophia of Silicon Valley is a seriously wild ride.”
—Bustle


"Debut novelist Yen's years of working with multiple tech companies provide a real insider's peek at the craziness of the industry while still keeping it light. This is Silicon Valley chick lit with a smart and smart-ass heroine trying to 'have it all,' and readers of books like Elisabeth Egan’s A Window Opens (2015) and Allison Pearson’s I Don’t Know How She Does It (2002) will enjoy this modern take. "
—Booklist


"This first novel is a fast-paced romp through the boom years of the tech industry...Yen's brash and frenetically energetic novel leaves readers gasping in its wake...The author's experience in the tech industry lends authenticity to this novel, and fans of Lauren Weisberger's The Devil Wears Prada may appreciate the cutthroat atmosphere if not the lack of Prada."
—Library Journal


"[A]n entertaining and humorous read set in the world of Silicon Valley startups, featuring a fun female protagonist. Fans of The Devil Wears Prada will love the similar vibe and working-girl-rises-to-the-top theme of the story."
—RT Book Reviews


"With uncanny parallels to the Silicon Valley narratives we know and love, Anna Yen manages to break the mold with this fresh debut about being a young woman coming up in tech. Told with sharp wit and unforgettable detail, Sophia of Silicon Valley is a remarkably entertaining story and one of my favorite books in years!”
—Jon M. Chu, Film Director, “Crazy Rich Asians"


"A funny and surprisingly inspirational story about a genuine character, Sophia, who truly “leans in” to life in Silicon Valley's fast lane.  You get hooked on the roller coaster ride, watching her fall on her face, and pop back up-- several times!  Yen’s roman a clef is a delightful, touching tale that is perfect for the tech-generation or anyone fascinated by its culture."
—Larry Kramer, founder of MarketWatch and Chairman of TheStreet, and former editor in chief of USA Today.


"This laugh-out-loud inspired tale offers a peek behind the mysterious idiosyncrasies of Silicon Valley geniuses and one woman's fight to navigate career success while having a life."
—Ellen Pack, founder of women.com