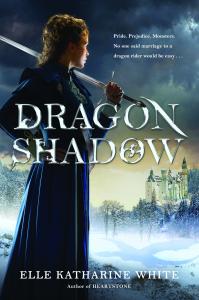 The author of Heartstone once again infuses elements of Jane Austen’s beloved novel with her own brand of magic in this addictive fantasy that brings back sparring lovers Aliza and Alastair: fierce warriors who match wits, charm, and swords as they fight an epic war to save their world.

The Battle of North Fields is over—or so Aliza Bentaine, now a Daired, fervently wants to believe. But rumors are spreading of an unseen monster ravaging the isolated Castle Selwyn on the northern border of the kingdom. When she and Alastair are summoned from their honeymoon by the mysterious Lord Selwyn, they must travel with their dragon Akarra through the Tekari-infested Old Wilds of Arle to answer his call.

And they are not alone on this treacherous journey. Shadowing the dragonriders is an ancient evil, a harbinger of a dark danger of which the Worm was only a foretaste. And soon Aliza realizes the terrible truth: the real war is only beginning.

“Calling all fans of dragons and Jane Austen! While White stays faithful to most of the classic story’s plot elements, she add hers own twists and turns as Aliza Bentaine’s world grows ever more dangerous. Definitely an author to watch!”
—RT Book Reviews


“If you’re into Austen retellings, or if you like talking dragons with your regency romance, or if you’re just looking for an upbeat, lighthearted change to your fantasy routine, Heartstone is for you.”
—The Book Smugglers