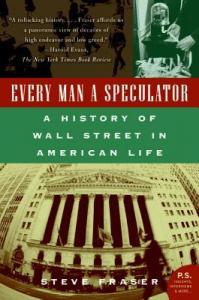 Every Man a Speculator: A History of Wall Street in American Life

Americans have experienced a love-hate relationship with Wall Street for two hundred years. Long an object of suspicion, fear, and even revulsion, the Street eventually came to be seen as an alluring pathway to wealth and freedom. Steve Fraser tells the story of this remarkable transformation in a brilliant, masterfully written narrative filled with colorful tales of confidence men and aristocrats, Napoleonic financiers and reckless adventurers, master builders and roguish destroyers. Penetrating and engrossing, this is an extraordinary work of history that illuminates the values and the character of our nation.

Reviews:
"An illuminating tour of how the United States has perceived its financial center over two centuries….[Fraser’s] prose is elegant, and his eye for historical detail is keen, carrying the reader through the many sagas that he entertainingly recounts….”Every Man A Speculator” provides provocative insights into the way the nation has evolved.”
—Washington Post


”This is far more than a fiscal history of the globe's greatest economy. Fraser draws on Twain, Melville and James as much as any corporate speculator or free-market pioneer to capture the evolving atmosphere of the street that has become a byword for capitalism.”
—Esquire


”Unlike most histories of Wall Street, Fraser’s work is not a study in economics but a lively account of the effect the centre of the financial district has had upon the nation – and not just its politics but its culture and media as well.”
—BBC History Magazine


“With considerable panache, Steve Fraser here recounts this cyclical story of America’s love-hate relationship with the Street….The author succeeds in posing the essential question of whether the American financial system has ever had or can ever have a moral centre, and the answer seems to be that it depends on how much money you make.”
—Sunday Telegraph


“Serious and scholarly….full of fascinating anecdotes, captivating characters and references to 200 year of popular and high culture….informative, interesting and well worth the investment.”
—USA Today


“Every Man a Speculator is a treasure trove of information.”
—The American Prospect

“[A] rollicking history over two centuries….This is not so much a financial as a cultural history….The popular mood pictured in Every Man a Speculator is volatile. It swings from loathing in the bad years to irrational exuberance in the good….But Fraser…has a keen grasp of his material, and his vivacious style and historical perspective carry us through the tumults….He deserves a cheer for his long ascent to the summit. He affords us a panoramic view of decades of high endeavor and low greed.”
—The New York Times


“Engaging…Fraser’s prose is elegant, at times poetic…. Every Man a Speculator is The Iliad set on Wall Street, its literary gravity pulling you along with the sweep of its narrative and the stylishness of the telling.”
—Boston Globe


"Writer, historian, and book editor Fraser (The Bell Curve Wars) presents a monumental cultural history of speculation in the United States as played out on the stages of Wall Street. Informing this rich chronicle are authentic newspaper reports, magazine pieces, letters, movies, novels, plays, transcripts, and other eyewitness accounts dating from Dutch Colonial times to the present. Fraser’s painstaking research reveals much about the major players of Wall Street, from Cornelius Vanderbilt to Michael Milken while shedding light on minor characters (e.g., Hetty Green, a.k.a., “The Witch of Wall Street”) and historical events like the 1929 stock market crash and the Great Depression. Given how speculative the early Colonists were, the invention of Wall Street was certainly no accident; the author suggests its growth paralleled that of America itself with a similar 'manifest destiny.' This scholarly and entertaining encyclopedic history documents an important part of U.S. business history, which makes it an essential purchase for all libraries."
—Library Journal


“Fraser tells a monumental story with real energy; moral disapproval of usury, gambling and single-minded moneymaking fade as bankers come to embody the hope and threat of the future. Careful consideration of subtle changes in popular notions makes good sense of the transformation from Gilded Age to Information Age, and of the complex conflicts many people still feel.”
—Publishers Weekly


“Fraser gives a thorough analysis of this scandal-ridden menagerie as reflected in books, movies, and the political arena.”
—Booklist, starred


“The same attraction and greed that brought colonial traders together in the Street’s coffeehouses or under its fabled buttonwood tree (fiction, debunks Fraser) continue to gather hustlers in myriad Starbucks or under trees everywhere in the world….Certainly 'Wall Street' is a synecdoche for much of our commercial culture….Comprehensive, considered, and literate: a real accomplishment.”
—Kirkus Reviews, starred


“There have been many histories of and about Wall Street, but none of the breadth, the scope, and the importance of Every Man A Speculator. Steve Fraser writes about Wall Street as metaphoric engine and agent of American enterprise, American myth, and the American dream as it has been fashioned and refashioned from the 17th century through the 21st. Fraser’s synthesis is in the grand tradition of large-scale history, marked by a wide use of literary and historical sources and his gloriously fluent, accessible, and passionate prose. His research is as thorough and his analysis as rigorous and subtle as any historian now writing. His book should be widely read by scholars, students, and anyone interested in America’s tortured and ambivalent relationship with big business and big finance.”
—David Nasaw, author of The Chief


"Written with verve, passion, and a remarkable command of a vast historical literature, Every Man a Speculator illuminates Americans' tortured relationship with Wall Street from the days of Alexander Hamilton to the bubbles and frauds of the last few years. Fraser gives equal billing to titans of finance like Jay Gould, J. P. Morgan, and their modern successors, and to the array of critics -- Jeffersonians, Populists, New Dealers, and writers like Veblens and C. Wright Mills, who laid bare the ways concentrated financial power has shaped American society.  The book offers a remarkable array of insights into the history of American capitalism, and a changing American culture."
— Eric Foner, author of Reconstruction