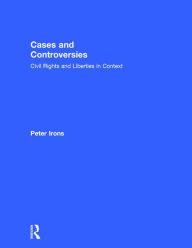 Cases and Controversies: Civil Rights and Liberties in Context

This casebook—containing longer excerpts than those found in most other books— includes cases from important Supreme Court opinions and material that places these cases and the issues they raise in a broad political, historical, and social context. The volume presents Supreme Court challenges and land mark decisions involving wartime protest and hysteria; the Great Depression; and conflicts over issues such as abortion. A focus on the "characters" who make up the stories of constitutional law—such as Dred Scott, Homer Plessy, Lillian Gobitis, Gordon Hirabayashi, Mary Beth Tinker, and Michael Hardwick—adds human faces and voices to the Supreme Court opinions, and introduces the fascinating players—with fundamental divisions of interest and values—who have had roles in making legal history. For individuals interested in constitutional law.