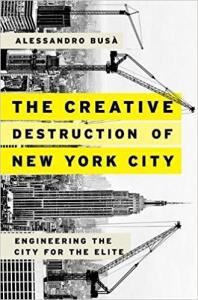 The Creative Destruction of New York City: Engineering the City for the Elite

Bill de Blasio's campaign rhetoric focused on a tale of two cities: rich and poor New York. He promised to value the needs of poor and working-class New Yorkers, making city government work better for everyone-not just those who thrived during Bloomberg's tenure as mayor. But well into de Blasio's administration, many critics think that little has changed, especially in terms of land owners' and developers' profits. Despite the mayor's goal of creating more affordable housing, Brooklyn and Manhattan sit atop the list of the most unaffordable housing markets in the country. It seems that the old adage is becoming truer: New York is a place for only the very rich and the very poor.

In The Creative Destruction of New York City, urban scholar Alessandro Busà  travels to neighborhoods across the city, from Harlem to Coney Island, to tell the story of fifteen years of drastic rezoning and rebranding, updating the tale of two New Yorks. There is a gilded city of sky-high glass towers where Wall Street managers and foreign billionaires live-or merely store their cash. And there is another New York: a place where even the professional middle class is one rent hike away from displacement. Despite de Blasio's rhetoric, the trajectory since Bloomberg has been remarkably consistent. New York's urban development is changing to meet the consumption demands of the very rich, and real estate moguls' power has never been greater.

Major players in real estate, banking, and finance have worked to ensure that, regardless of changes in leadership, their interests are safeguarded at City Hall. The Creative Destruction of New York City is an important chronicle of both the success of the city's elite and of efforts to counter the city's march toward a glossy and exclusionary urban landscape. It is essential reading for everyone who cares about affordable housing access and, indeed, the soul of New York City.

Reviews:
"Busà's energetic scholarship digs under New York's recent branding as 'trendy' and 'green' to unearth the real effects of zoning changes on the city's neighborhoods. He illuminates the central role of land politics in making the city less affordable--and less authentically 'New York.' This is a passionate cry for the city's soul."
—Sharon Zukin, author of Naked City and Loft Living


"An important work on hyper-gentrification and its destructive effect on urban life in the twentyfirst century, this lucid analysis reveals how power players in the Bloomberg administration commodified and corporatized the city, reshaping it into a luxury product for the global elite, and how Mayor de Blasio has followed suit.
New York didn't become a city for the one percent by accident, and this book is essential reading for understanding how it all happened."
—Jeremiah Moss, author of Vanishing New York - How a Great City Lost Its Soul


"A searching look at how New York changed from a place of affordable (if tiny) walk-ups to a playground for the ultrawealthy."
—Kirkus Reviews


"In this lively account of New York City's recent history, Alessandro Busà shows how massive changes in New York's built environment result in the same dismal outcomes for the less advantaged. This is an essential read for anyone concerned with how great cities are becoming increasingly exclusionary even while fostering creativity."
—Susan S. Fainstein, Senior Research Fellow, Harvard Graduate School of Design


"Alessandro Busà combines his rich personal encounters with daily life in New York City's neighborhoods with meticulous research and deep historical analysis. This is an engaging tale of the ways that capital and its growth machine, driven by real estate and finance, have shaped the city, resulting in a continual cycle of creative destruction that has consequences obscured by the city's branded image."
—Tom Angotti, Professor Emeritus, Hunter College and the Graduate Center, City University of New York


"A superb and persuasive account of the frenzied state of what can best be described as 'hypergentrification' in New York City: an elite-led process of rebranding and re-engineering that the author argues has heralded the most aggressive urban development agenda ever adopted in New York City. The book balances academic rigor with storytelling, and the result is a rich, readable, and energizing book."
—Loretta Lees, co-author of Gentrification and Planetary Gentrification