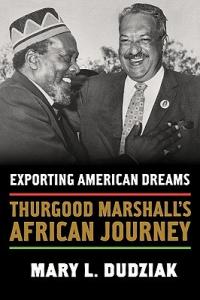 Thurgood Marshall became a living icon of civil rights when he argued Brown v. Board of Education before the Supreme Court in 1954. Six years later, he was at a crossroads. A rising generation of activists were making sit-ins and demonstrations rather than lawsuits the hallmark of the civil rights movement. What role, he wondered, could he now play? When in 1960 Kenyan independence leaders asked him to help write their constitution, Marshall threw himself into their cause. Here was a new arena in which law might serve as the tool with which to forge a just society.
In Exporting American Dreams, Mary Dudziak recounts with poignancy and power the untold story of Marshall's journey to Africa. African Americans were enslaved when the U.S. constitution was written. In Kenya, Marshall could become something that had not existed in his own country: a black man helping to found a nation. He became friends with Kenyan leaders Tom Mboya and Jomo Kenyatta, serving as advisor to the Kenyans, who needed to demonstrate to Great Britain and to the world that they would treat minority races (whites and Asians) fairly once Africans took power. He crafted a bill of rights, aiding constitutional negotiations that helped enable peaceful regime change, rather than violent resistance.
Marshall's involvement with Kenya's foundation affirmed his faith in law, while also forcing him to understand how the struggle for justice could be compromised by the imperatives of sovereignty. Marshall's beliefs were most sorely tested later in the decade when he became a Supreme Court Justice, even as American cities erupted in flames and civil rights progress stalled. Kenya's first attempt at democracy faltered, but Marshall's African journey remained a cherished memory of a time and a place when all things seemed possible.

Reviews:
"Readers who enjoy a thoughtful, accessible book that covers a seminal period in the histories of the two countries will appreciate the rich material this book provides."
—History: Reviews of New Books


"Legal and history professor Dudziak explores Marshall’s friendships with Tom Mboya, the labor organizer who invited him to Kenya, and Jomo Kenyatta, who went on to become Kenya’s first elected president. She also explores the turbulence that continued to brew in the U.S. as the civil rights movement grew to full force at the same time that African nations were fighting for independence. Marshall was privileged to have a front seat in the struggles in the U.S. and Africa, putting to the test his personal faith in the American ideals of freedom and democracy."
—Booklist


"Effectively sketches those events in the civil rights movement... Dudziak's clarity and careful documentation make her book accessible to the general reader and a valuable tool for African and African-American studies."
—Publishers Weekly


"This book on a less-studied part of Marshall's career is recommended for libraries collecting in law, legal processes, and African and African American history."
—Library Journal


"Dudziak's narrative proceeds by deftly interweaving the historical events of the 1960s in the United States and Kenya, with Marshall as the focal point and link.... The true genius [of the book] is in using Marshall as both a concrete and conceptual link between the civil rights protest movements of the early and late 1960s and the tactical and principled choices of US civil rights leaders or the leaders of the Kenyan independence movement.... Thought provoking and painstakingly researched."
—Law & Politics Book Review


"In this gem of a book, Mary Dudziak brings vividly to life the important but little known history of Thurgood Marshall's intense involvement with Kenya during its journey toward independence in the 1960s. This great champion of the American civil rights struggle never relinquished his hope that democracy and equality would one day flourish in Kenya, even as he became painfully aware of the obstacles that stood in the path of this dream. A powerful and poignant story, beautifully told."
—Gary Gerstle, Vanderbilt University and author of American Crucible: Race and Nation in the Twentieth Century


"Dudziak brings out with impressive clarity how Thurgood Marshall's greatness stemmed from his Whitman-esque ability to contain multitudes: committed to the rule of law, he could chide Kenya's new leadership for departing even slightly from it, work for justice in segregated America, and sustain a relationship with young civil rights activists taking direct and 'illegal' action in the early 1960s."
—Mark Tushnet, Harvard Law School and author of Making Civil Rights Law: Thurgood Marshall and the Supreme Court, 1956-1961


"By dint of creative and exhaustive research, Mary Dudziak has written an excellent book about a facet of Thurgood Marshall's career that has never before received substantial attention. Who knew that 'Mr. Civil Rights' contributed significantly to African as well as American legal systems. All students of this great man's life owe a major debt to Professor Dudziak's labors."
—Randall Kennedy, Harvard Law School and author of Sellout: The Politics of Racial Betrayal