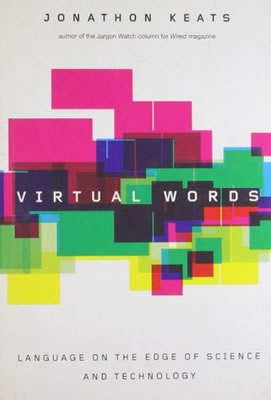 Virtual Worlds: Language on the Edge of Science and Technology

The technological realm provides an unusually active laboratory not only for new ideas and products but also for the remarkable linguistic innovations that accompany and describe them. How else would words like qubit (a unit of quantum information), crowdsourcing(outsourcing to the masses), or in vitro meat (chicken and beef grown in an industrial vat) enter our language?

In Virtual Words: Language on the Edge of Science and Technology, Jonathon Keats, author of Wired Magazine's monthly Jargon Watch column, investigates the interplay between words and ideas in our fast-paced tech-driven use-it-or-lose-it society. In 28 illuminating short essays, Keats examines how such words get coined, what relationship they have to their subject matter, and why some, like blog, succeed while others, like flog, fail. Divided into broad categories--such as commentary, promotion, and slang, in addition to scientific and technological neologisms--chapters each consider one exemplary word, its definition, origin, context, and significance. Examples range from microbiome (the collective genome of all microbes hosted by the human body) and unparticle (a form of matter lacking definite mass) to gene foundry (a laboratory where artificial life forms are assembled) and singularity (a hypothetical future moment when technology transforms the whole universe into a sentient supercomputer). Together these words provide not only a survey of technological invention and its consequences, but also a fascinating glimpse of novel language as it comes into being.

No one knows this emerging lexical terrain better than Jonathon Keats. In writing that is as inventive and engaging as the language it describes, Virtual Words offers endless delights for word-lovers, technophiles, and anyone intrigued by the essential human obsession with naming.

Reviews:
"Clever and humorous... Whether you are among the people or the tweeple, you are sure to be educated and entertained."
—New Scientist


"What's not to like about Jonathon Keats? His new book, Virtual Words: Language on the Edge of Science and Technology, comprises 28 short essays in which he looks at the relationship between words and ideas in our modern high-tech culture. It's brainy stuff, but he is never less than interesting when he tries to figure out the significance of expressions such as "crowd-sourcing," "w00t," and "in vitro meat" entering the lexicon."
—SF Weekly