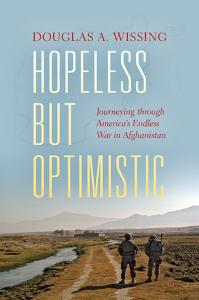 Hopeless but Optimistic: Journeying through America's Endless War in Afghanistan

Award-winning journalist Douglas A. Wissing's poignant and eye-opening journey across insurgency-wracked Afghanistan casts an unyielding spotlight on greed, dysfunction, and predictable disaster while celebrating the everyday courage and wisdom of frontline soldiers, idealistic humanitarians, and resilient Afghans. As Wissing hauls a hundred pounds of body armor and pack across the Afghan warzone in search of the ground truth, US officials frantically spin a spurious victory narrative, American soldiers try to keep their body parts together, and Afghans try to stay positive and strain to figure out their next move after the US eventually leaves. As one technocrat confided to Wissing, "I am hopelessm, but optimistic."

Wissing is everywhere in Afghanistan, sharing an impressionistic view from little white taxis coursing across one of the world's most mine-ridden places; a perilous view from outside the great walls surrounding America's largest base, sequestered Bagram Air Field; and compelling inside views from within embattled frontline combat outposts, lumbering armored gun trucks and flitting helicopters, brain trauma clinics, and Kabul's Oz-like American embassy. It's Afghan life on the streets; the culture and institutions that anneal them; the poetry that enriches them. It includes the perspectives of cynical military lifers and frightened short-timers; true believers and amoral grabbers; Americans and Afghans trying to make sense of two countries surreally contorted by war-birthed extractive commerce.

Along with a deep inquiry into the 21st-century American way of war and an unforgettable glimpse of the enduring culture and legacy of Afghanistan, Hopeless but Optimistic includes the real stuff of life: the austere grandeur of Afghanistan and its remarkable people; warzone dining, defecation, and sex; as well as the remarkable shopping opportunities for men whose job is to kill.

Reviews:
“A scathing dispatch from an embedded journalist in Afghanistan. Demoralization, staggering waste, and corruption: this is the norm in Afghanistan as U.S. troops move into full retrograde (meaning retreat) and other foreign entities like NATO jump ship out of a keen sense of their own futile mission. In this episodic chronicle spanning some months in 2013, when he embedded a third time with U.S. troops there, journalist Wissing (Funding the Enemy: How US Taxpayers Bankroll the Taliban, etc.) describes how the counterinsurgency was almost too painful to talk about among an occupying army that saw its efficacy draining by the minute. In his short, punchy, poignant chapters, the author looks at the on-the-ground conditions for the hapless soldiers in terms of food, elimination, sex, PTSD, and the treatment of brain injury, among other topics. He concludes, as have many veterans there working for agricultural development and other aid projects, that in the end, 'the Afghan way is the best way.'"
—Kirkus Reviews


“As with an album of close-up photographs, Douglas Wissing’s concise essays cast a sharp and revealing light on their subject. Here we confront in granular detail the waste and folly that is America’s war in Afghanistan.  An empire in decline does not make for a pretty picture.
—Andrew J. Bacevich, author of America’s War for the Greater Middle East: A Military History


“When historians of the future try to explain how the United States could have accomplished so little in Afghanistan despite spending so much blood and treasure, this trenchant and honest book will be a crucial source.  An important read for anyone who cares about American foreign policy in the 21st century.”
—Alex Berensen, New York Times-bestselling author of The Ghost War and Twelve Days


“If I could recommend one book about Afghanistan to the next president, it'd be this one. If s/he can't learn the lessons of the failed war in Iraq from the ground truth, maybe s/he can learn them from Wissing's brilliant, funny, sad, irreverent, serious, deeply reported, hopeless—but always optimistic—book. Required reading.”
—Peter Van Buren, former U.S. State Department foreign service officer and author of We Meant Well: How I Helped Lose the War for the Hearts and Minds of the Iraqi People.


“Afghanistan is one huge enigma for most Americans. Douglas Wissing’s book helps us sort it out. He has repeatedly been in Afghanistan, observed everything, and reports it all in this remarkable volume. This book is the place for most of us to learn about this woebegone, but resilient land, and America’s endless war.”
—Lee H. Hamilton, former US Representative; former vice chairman of the 9/11 Commission and co-chairman of the Iraq Study Group


“This is a fine and troubling book about America’s plunge into the nightmare otherwise known as Afghanistan. Douglas Wissing’s concise thirty-odd chapters are like graphic flash-cards conveying the confusing mix of violence and corruption, along with bursts of decency and courage, that define this endless war.”
—Karl E. Meyer, former New York Times and Washington Post editorial board member, and co-author with Shareen Bysac of The Tournament of Shadows about Central Asia's Great Game, and Kingmakers, on the invention of the modern Middle East.


“Douglas Wissing’s Hopeless but Optimistic provides a fascinating ground level account of the effect of absurd and inappropriate Washington strategies on Afghans and on American soldiers.  Its short hard-hitting chapters illustrate with pithy anecdotes how 'hearts and minds' and other senseless silver-bullet approaches to the war only benefitted well-connected Beltway contractors and Afghan drug traffickers and warlords, and failed to help Afghan farmers and American soldiers. Americans prefer to forget Afghanistan, but that would be a shame because this lost trillion-dollar war illustrates the hubris of policies sold by both the Bush and Obama administrations. This book vividly illustrates the cost of this hubris beyond the trillion dollars wasted and the official casualties numbers.”
—Abdulkader Sinno, author of Organizations at War in Afghanistan & Beyond and editor of Muslims in Western Politics


“A seasoned award-winning journalist systematically and methodically unpacks with brutal honesty the wasting of a trillion US taxpayers’ dollars by America’s Deep State in 'retrograde' from its longest privatized twenty first century war in Afghanistan. It is Wissing’s most insightful and heartfelt accounts of his embeds with America’s best and most dedicated warriors, male and female, in the most insurgency ridden corners of Afghanistan. Hopeless but Optimistic is a well-crafted, often humorous and candid narration of Wissing’s most intimate encounters with America’s worst US State Department careerists burning money, army officers spinning self-delusional victory spiels, and the highly paid development consultants re-doing the same projects over again. It is a story of America’s military industrial complex driven wars filled with moral outrage. A must read for anyone interested in learning why America’s longest war and reconstruction efforts in collaboration with its corrupt partners in Afghanistan have produced hopelessness and yet they remain optimistic.”
—Nazif Shahrani, author of The Kirghiz and Wakhi of Afghanistan: Adaptation to Closed Frontiers and War