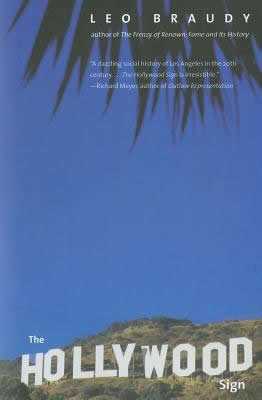 The Hollywood Sign: Fantasy and Reality of an American Icon

Hollywood's famous sign, constructed of massive white block letters set into a steep hillside, is an emblem of the movie capital it looms over and an international symbol of glamour and star power. To so many who see its image, the sign represents the earthly home of that otherwise ethereal world of fame, stardom, and celebrity--the goal of American and worldwide aspiration to be in the limelight, to be, like the Hollywood sign itself, instantly recognizable.
How an advertisement erected in 1923, touting the real estate development Hollywoodland, took on a life of its own is a story worthy of the entertainment world that is its focus. Leo Braudy traces the remarkable history of this distinctly American landmark, which has been saved over the years by a disparate group of fans and supporters, among them Alice Cooper and Hugh Hefner, who spearheaded its reconstruction in the 1970s. He also uses the sign's history to offer an intriguing look at the rise of the movie business from its earliest, silent days through the development of the studio system that helped define modern Hollywood. Mixing social history, urban studies, literature, and film, along with forays into such topics as the lure of Hollywood for utopian communities and the development of domestic architecture in Los Angeles, The Hollywood Sign is a fascinating account of how a temporary structure has become a permanent icon of American culture.

Reviews:
“In a scholarly yet entertaining slice of cultural history, Braudy muses upon this American icon with nimble riffs on movie lore, real estate and the strange allure of la la land.”
—Sunday Telegraph


“…dazzlingy enjoyable exposition… Braudy brilliantly explores what Hollywood would term the backstory to the sign.”
—The Independent


“Braudy has artfully distilled the historic specifics to produce a kind of allegory: This is the story of how a grandiose real estate billboard fell into neglect and came to stare down at its indifferent city as time marched on and the winds of culture shifted, until finally it was rescued by a motley group of charitable givers to become what it is today: L.A.'s most photographed scene, pending Lindsay Lohan's next court appearance. … Braudy's discipline as a writer is that of the cultural critic. Much of "The Hollywood Sign" involves a rigorous reexamination of cultural and historical epochs — in this case covering the social, architectural, cinematic and art world developments happening in Los Angeles from the turn of the century to the present.”
—Los Angeles Times


“[Leo Braudy] is one of our leading critics and historians, and a go-to guy for a sharp take on the semiotics of American popular culture…. penetrating intelligence and deep-rooted knowledge of history, culture and politics is now brought to bear on the Hollywood sign. … Braudy’s book is full of insight about an object that is always there and yet seldom intrudes on our consciousness.”
—Jewish Journal


“Our guide to the sign could not be improved on. … Braudy is interested in far more than the surreal letters stuck in the ground, and he knows the movies as well as the places. This is a magically brief book, written with wit and elegance, on the whole history of Los Angeles and the movies, and the bizarre way they both live with this grotesque label—not just refurbished but guaranteed by a Trust—and as instantly recognizable as the Eiffel Tower.”
—The New Republic