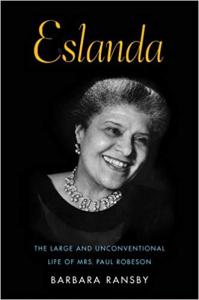 Eslanda: The Large and Unconventional Life of Mrs. Paul Robeson

The first biography of the bold, principled, and fiercely independent woman who defied convention to make her own mark on the world

Eslanda "Essie" Cardozo Goode Robeson lived a colorful and amazing life. Her career and commitments took her many places: colonial Africa in 1936, the front lines of the Spanish Civil War, the founding meeting of the United Nations, Nazi-occupied Berlin, Stalin's Russia, and China two months after Mao's revolution. She was a woman of unusual accomplishment—an anthropologist, a prolific journalist, a tireless advocate of women's rights, an outspoken anti-colonial and antiracist activist, and an internationally sought-after speaker. Yet historians for the most part have confined Essie to the role of Mrs. Paul Robeson, a wife hidden in the large shadow cast by her famous husband. In this masterful book, biographer Barbara Ransby refocuses attention on Essie, one of the most important and fascinating black women of the twentieth century.

Chronicling Essie's eventful life, the book explores her influence on her husband's early career and how she later achieved her own unique political voice. Essie's friendships with a host of literary icons and world leaders, her renown as a fierce defender of justice, her defiant testimony before Senator Joseph McCarthy's infamous anti-communist committee, and her unconventional open marriage that endured for over 40 years—all are brought to light in the pages of this inspiring biography. Essie's indomitable personality shines through, as do her contributions to United States and twentieth-century world history.

Reviews:
“This long overdue biography of a bold scholar-activist emerging from the shadow of her famous husband is a gift, and such are Ransby’s narrative skills that I wept when, in her final pages, the vibrant Essie died, two days shy of 70. Ransby has a history of rescuing historically overlooked black female leaders; a prior biography was of the venerable civil rights activist Ella Baker. This new work is a major contribution to her glorious reclamation project.”
—Joan Steinau Lester, Ms. Magazine


“Fascinating…A poignant portrait of a peripatetic, human rights activist willing to challenge oppression of any form wherever she could find it.”
—Kam Williams, Insight


“What Barbara Ransby achieved in her biography of Ella Baker is repeated with verve and astonishing insight in ‘Eslanda: The Labor and Unconventional Life of Mrs. Paul Robeson’.”
—Herb Boyd, New York Amsterdam News