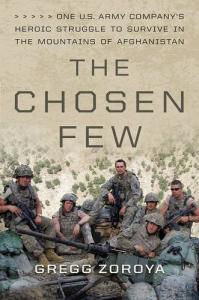 The Chosen Few: One US Army Company's Heroic Struggle to Survive in the Mountains of Afghanistan

A single company of US paratroopers, calling themselves the "Chosen Few", arrived in eastern Afghanistan in late 2007 hoping to win the hearts and minds of the remote mountain people and extend the Afghan government's reach into this wilderness. Instead, they spent the next fifteen months in a desperate struggle, living under almost continuous attack, forced into a slow and grinding withdrawal, and always outnumbered by Taliban fighters descending on them from all sides.

When the Battle of Wanat ended, those who survived came home to a different kind of victory, not of enemies destroyed or cities captured but of acclaim as one of the most decorated fighting units in America's modern wars. Two among them would receive the Medal of Honor for valor in combat. All of them would be forever changed.