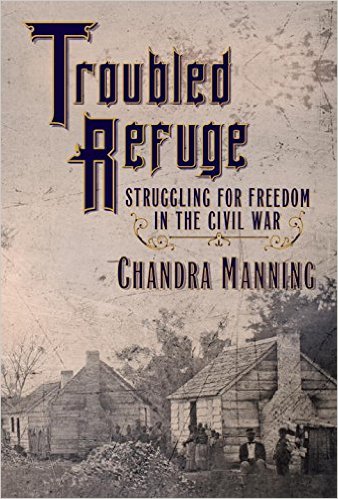 Troubled Refuge: Struggling for Freedom in the Civil War

A fascinating and original portrait of the escaped-slave refugee camps and how they shaped the course of emancipation and black citizenship.

By the end of the Civil War, nearly half a million slaves had taken refuge behind Union lines, in what became known as "contraband camps." These were crowded, dangerous places, yet some 12-15 percent of the Confederacy's slave population took almost unimaginable risks to reach them, and they became the first places Northerners came to know former slaves en masse. Ranging from stories of individuals to those of armies on the move to the debates in Congress, Troubled Refuge probes what the camps were really like and how former slaves and Union soldiers warily united there. This alliance, which would outlast the war, helped to destroy slavery and ward off the surprisingly tenacious danger of re-enslavement. But it also raised unsettling questions about the relationship between American civil and military authority, and reshaped the meaning of American citizenship, to the benefit as well as the lasting cost of African-Americans.

Reviews:
"A striking...highly engaging narrative...[Troubled Refuge] tells us a sobering yet uplifting story of the journey toward freedom. [Chandra Manning's] deep research allows her to expand her cast of historical actors in the African-American community who agitated for freedom...In her superb telling we learn something invaluable about the fragile and chaotic nature of the coming of freedom and the enduring dignity and courage of the people who secured it."
—Wall Street Journal


"An enlightened study…Manning shows how the memory of the wartime alliance between contrabands and the Union Army made the federal government at least an occasional supporter of black rights over the next 100 years.”
—Publisher’s Weekly


"A vivid, compelling view of the struggles undertaken by escaped slaves during the Civil War…Manning conveys in gritty detail the fraught alliance between refugees and their military protectors."
—Kirkus Reviews (starred)