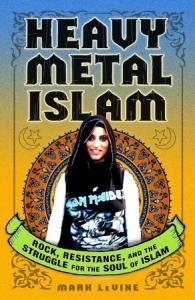 Heavy Metal Islam: Rock, Resistance, and the Struggle for the Soul of Islam

“We play heavy metal because our lives are heavy metal.”
—Reda Zine, one of the founders of the Moroccan heavy-metal scene

“Music is the weapon of the future.”
—Fela Kuti

An eighteen-year-old Moroccan who loves Black Sabbath. A twenty-two-year-old rapper from the Gaza Strip. A young Lebanese singer who quotes Bob Marley’s “Redemption Song.” They are as representative of the world of Islam today as the conservatives and extremists we see every night on the news. Heavy metal, punk, hip-hop, and reggae are each the music of protest, and in many cases considered immoral in the Muslim world. This music may also turn out to be the soundtrack of a revolution unfolding across that world.

Why, despite governmental attempts to control and censor them, do these musicians and fans keep playing and listening? Partly, of course, for the joy of self-expression, but also because, in this region, everything is political. In Heavy Metal Islam, Mark LeVine explores the influence of Western music on the Middle East through interviews with musicians and fans, introducing us young Muslims struggling to reconcile their religion with a passion for music and a desire for change. The result is a revealing tour of contemporary Islamic culture through the evolving music scene in the Middle East and Northern Africa. Heavy Metal Islam is a surprising, wildly entertaining foray into a historically authoritarian region where music just might be the true democratizing force.

Reviews:
“Offers the hit-and-run pleasures of a lively road trip…. Levine manages to unpack enough cross-cultural incongruities to mount his own mosh pit follow-up to ‘You Don’t Mess With the Zohan….informative, valuable, and moderately mad.”
—The New York Times Book Review


“A fascinating social phenomenon….[LeVine’s] material is rich, as he mingles scenes of conflict with surprising moments of understanding.”
—Los Angeles Times


“There's something irresistible about the idea that LeVine… not only interviewed rock and rap artists from all over the Middle East and North Africa but also put down the notepad and got up onstage to jam with them."
—Slate.com


“A deeply felt, informed volume that’s both hopeful and emotionally honest…LeVine does a remarkable job, sketching not only the surprising realities of the musicians, but also providing excellent historical background and terrific detail….anyone–regardless of musical preference–who wants an eye-level glimpse into the Middle East should pick up Heavy Metal Islam."
—Paste magazine


“With a jolting arrangement of images and voices, LeVine powerfully upends received notions about the Middle East by exploring one of the area's least-known subcultures…. LeVine argues that if these musicians could find a way to cooperate with progressive religious activists and the working class, they could trigger a revolution. This is a tall order, but the author's warm and intelligent examination of a reality few in the West have experienced suggests it may yet be possible.”
—Publishers Weekly, starred


“Using music as a prism to observe social relations, he expertly describes the political upheaval and social confusion in the Middle East that Westerners ignore or seldom understand. This examination of the changing and evolving cultures in a key global region is highly recommended.”
—Library Journal


“Heavy Metal Islam is a fun read, and an important one. As an American, Islam has been portrayed as the boogie man. I don't know much about the culture or musical influences. As a musician I can relate to the struggles [of] trying to write and record songs and the difficulty of finding hard rock records where they don't exist. So this was a pleasant surprise that these young artists and fans from such a different culture can enjoy the same soundtrack of my youth. I guess Lemmy is God in all languages.”
—Gilby Clarke, former guitarist for Guns N’ Roses and star of the hit TV reality show, Rock Star Supernova