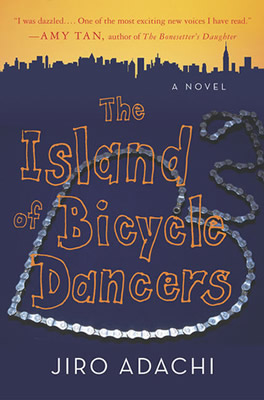 The Island of Bicycle Dancers: A Novel

This is the coming-of-age story of twenty-year old Yurika Song, a Korean-Japanese woman who comes from Japan to New York City for a summer to work with her Korean relatives and improve her English. Yurika's friends back home have always joked that she is half-sushi/half kim-chi. But cross-Asian ethnicities turn out to be far less jarring than her entree into New York life in the guise of bicycle messengers and the street culture in which they thrive.
On one level this is a tale of mistaken love--Yurika falls hard for an attractive, but dangerous, Puerto Rican bicycle messenger nicknamed "Bone." But on another, deeper level, our heroine finds freedom in this new language, which to her "is like a huge octopus, very clever and sometimes hard to catch."

Reviews:
“I was dazzled.... One of the most exciting new voices I have read.”
—Amy Tan


“A classic immigrant's saga of newcomers taking up the American Dream that has been rejected by natives.... Raw.”
—Kirkus Reviews