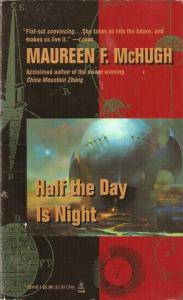 Half The Day Is Night

In a twenty-first-century undersea city, terrorists threaten old-money banker Mayla Ling, potentially plunging her and her bodyguard, war veteran David Dai, back into the nightmare of David's violent past. By the author of China Mountain Zhang.to plunge her--and David--into the nightmare of their own past.

Reviews:
"[McHugh is] one of the most promising new voices in the field."
—Publishers Weekly


"The author of China Mountain Zhang (Tor, 1992) accurately captures the claustrophobia of life in a sealed environment, where the internal stresses of daily life are mirrored by the literal pressure of living beneath tons of deadly ocean waters. This fast-paced sf adventure would be a welcome addition to most libraries."
—Library Journal