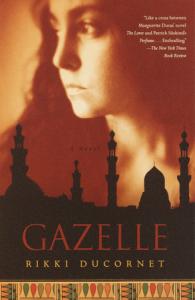 As mesmerizing as a tale from the lips of Sheherazade, Gazelle traces the story of Elizabeth, a thirteen-year-old American girl whose adolescent passion is awakened in theexotic climate of 1950s Cairo. While her mother–whose beauty and sexual prowess both frighten and fascinate Elizabeth–moves into a hotel to pursue a string of lovers, her father, a historian, loses himself in a world of chess and toy soldiers. Elizabeth’s imagination, primed by an explicit edition of The Arabian Nights, leads her to fantasies about her father’s friend, a gentle, older man named Ramses Ragab, a perfume maker who visits their house regularly to play games of war and who opens her up to the mystery of hieroglyphics and the art of exotic scents.

Reviews:
“Like a cross between Marguerite Duras’ novel The Lover and Patrick Suskind’s Perfume....Enthralling.”
—The New York Times Book Review


“Gazelle is a sensuous book . . . a smart book, intense, full of myths and magic.”
—The Washington Post Book World


“Everything about this Cairo-set novel is polished to perfection: the limning of the characters, the splendid evocation of Cairo’s atmosphere and the prose itself–faceted and brilliant as a fine jewel.”
—The Seattle Times


“Ducornet’s Cairo is a cyclone of personalities, faces, small spats, bizarre animals, crowded marketplaces and quiet stalls rich in carefully crafted curios, each with its own story. Gazelle is a sensitively imagined journey into a young girl’s ripening soul .”
—San Francisco Chronicle


“[Ducornet’s] magical, sensuous prose [is] redolent of street vendors’ herbs, the perfumer’s ambergris, the orange blossoms and rose petals of hidden gardens. This is storytelling that enchants the senses while not neglecting to engage the more critical faculties."
—The Boston Globe


“Gazelle, Rikki Ducornet’s seventh novel, is another of her bold, sumptuous narratives examining what one might call the Varieties of Desire. There is a great deal here that is beautiful and graceful; a great deal that is wonderfully comic and inventive.”
—Rocky Mountain News


“Gorgeous. . . . metaphors so stuffed onto the pages they drop into your lap like overripe plums.”
—Detroit Free Press


“Ducornet is a writer of extraordinary power, in whose books ‘rigor and imagination’ (her watchwords) perform with the grace and daring of high-wire acrobats.”
—Bomb