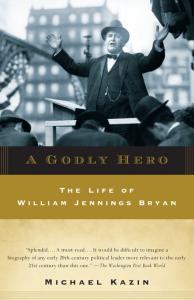 A Godly Hero: The Life Of William Jennings Bryan

Politician, evangelist, and reformer William Jennings Bryan was the most popular public speaker of his time. In this acclaimed biography—the first major reconsideration of Bryan’s life in forty years–award-winning historian Michael Kazin illuminates his astonishing career and the richly diverse and volatile landscape of religion and politics in which he rose to fame.

Kazin vividly re-creates Bryan’s tremendous appeal, showing how he won a passionate following among both rural and urban Americans, who saw in him not only the practical vision of a reform politician but also the righteousness of a pastor. Bryan did more than anyone to transform the Democratic Party from a bulwark of laissez-faire to the citadel of liberalism we identify with Franklin D. Roosevelt. In 1896, 1900, and 1908, Bryan was nominated for president, and though he fell short each time, his legacy–a subject of great debate after his death–remains monumental. This nuanced and brilliantly crafted portrait restores Bryan to an esteemed place in American history.


Selected as one of the best books of the year by The Washington Post, Chicago Tribune, Los Angeles Times, and St. Louis Post-Dispatch.

Reviews:
“It would be difficult to imagine a biography of any early 20th-century political leader more relevant to the early 21st century than this one.”
—Washington Post Book World


“Mr. Kazin succeeds in rescuing Bryan’s reputation…. As a biographical judge and jury, Mr. Kazin is admirably even-handed. He stands up for Bryan but is clear-eyed about his faults and confusions.”
—Wall Street Journal


“Kazin’s scholarship is impeccable and his understanding of the period profound.  His gracefully written portrait brings a nearly forgotten figure to life.”
—New York Review


“The author…is a highly capable biographer with a sure feel for the spirit of the times.  He is also too scrupulous a historian to conceal or excuse Bryan’s conspicuous shortcomings.”
—American Spectator


“While Kazin is not an apologist for Bryan, often pointing out his shortcomings – which included upholding segregation – he presents in this book the full story of one of the most remarkable careers in American public life, the story of a man who was quite literally loved by millions of his contemporaries.  The Bryan we meet in this book, while he isn’t a saint, is marked by a level of political honesty and personal integrity that we despair of meeting in the 21st century.”
—Home News Tribune


“…tells a rollicking story and brings back the resonant echoes of a glorious political voice.”
—Wilson Quarterly


“In the hands of a capable historian, Bryan reemerges as strangely relevant for today.”
—Christianity Today


“His Scopes-trial star turn notwithstanding, William Jennings Bryan here emerges as a proto-New Dealer and an exponent of an unrealized religious left.”
—The Atlantic Monthly


”Bryan emerges from Kazin's new biography as the founding father of the modern Democratic Party and maybe even of modern American politics... Kazin's attempt to see him in a modern light is instructive, illuminating -- and engagingly written.”
—Boston Globe


”Kazin brings a politically complex Bryan to life and vividly re-creates the political milieu in which his supporters and opponents operated... Kazin leaves no doubt as to his pivotal role in the forging of modern American politics.”
—Chicago Tribune


”Kazin, a superb political historian, trains a powerful searchlight on Bryan's career and the social political trends of the time.”
—The New York Times Book Review


“A Godly Hero: The Life of William Jennings Bryan… places the "Great Commoner" squarely in the context of his times…. Strongly recommended for public and academic libraries.”
—Library Journal


"Kazin... usefully contextualizes Bryan's hostility toward the theory of evolution: In addition to believing that it "opened the door wide to immoral behavior," he worried about the slippery slope from Darwinism to eugenics. History that remains solidly relevant today, and a real eye-opener for anyone who thinks that fierce debates over tax reform, corporate power, imperialism and evolution are recent developments in American politics and culture."
—Kirkus Reviews, starred