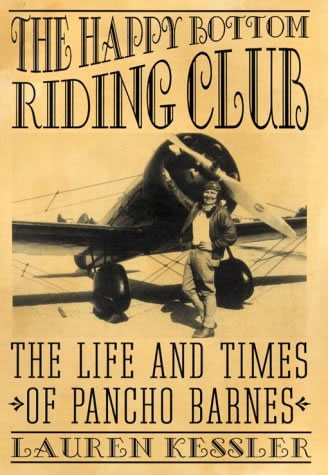 The Happy Bottom Riding Club: The Life and Times of Pancho Barnes

Pancho Barnes was a force of nature, a woman who lived a big, messy, colorful, unconventional life. She ran through three fortunes, four husbands, and countless lovers. She outflew Amelia Earhart, outsmarted Howard Hughes, outdrank the Mexican Army, and out- maneuvered the U.S. government. In The Happy Bottom Riding Club, award-winning author Lauren Kessler tells the story of a high-spirited, headstrong woman who was proud of her successes, unabashed by her failures, and the architect of her own legend.

Florence "Pancho" Barnes was a California heiress who inherited a love of flying from her grandfather, a pioneer balloonist in the Civil War. Faced with a future of domesticity and upper-crust pretensions, she ran away from her responsibilities as wife and mother to create her own life. She cruised South America. She trekked through Mexico astride a burro. She hitchhiked halfway across the United States. Then, in the late 1920s, she took to the skies, one of a handful of female pilots.

She was a barnstormer, a racer, a cross-country flier, and a Hollywood stunt pilot. She was, for a time, "the fastest woman on earth," flying the fastest civilian airplane in the world. She was an intimate of movie stars, a script doctor for the great director Erich von Stroheim, and, later in life, a drinking buddy of the supersonic jet jockey Chuck Yeager. She ran a wild and wildly successful desert watering hole known as the Happy Bottom Riding Club, the raucous bar and grill depicted in The Right Stuff.

In The Happy Bottom Riding Club, Lauren Kessler presents a portrait, both authoritative and affectionate, of a woman who didn't play by women's rules, a woman of large appetites--emotional, financial, and sexual--who called herself "the greatest conversation piece that ever existed."


"'Flying makes me feel like a sex maniac in a whorehouse,' declares Florence "Pancho" Lowe Barnes in Kessler's colorful biography of the female flyer, raconteur and scandalmonger. Drawing on personal interviews and other primary sources, Kessler details Barnes's flamboyant life: her privileged childhood in Pasadena at the beginning of the 20th century; her disastrous arranged marriage with minister Rankin Barnes, 10 years her senior, and the birth of her only child, Billy; her years as a flying ace and sexual profligate; and her penniless end as a possible murder victim whose corpse was partially eaten by her numerous starving dogs. Barnes was encouraged in her love of flying by her balloonist grandfather, Thaddeus Lowe, who flew the first air reconnaissance for the U.S. during the Civil War. In the 1920s, she began stunt flying for Hollywood, no mean feat considering that in 1929 only 34 of the 4,690 licensed pilots in the U.S. were women and none but Barnes did such work. She tested planes for Lockheed; wrote scripts for director Erich von Stroheim; worked with Howard Hughes on Hell's Angels, his multimillion-dollar flying epic; and founded the Association of Motion Picture Pilots. In 1929, she broke the women's speed record; six years later, she established the Women's Air Reserves, organized along military lines for aid in disasters. She spent WW II catering to pilots like Chuck Yeager at her Mojave Desert ranch and nightclub, the Happy Bottom Riding Club, which may or may not have been a high-toned brothel. This intriguing tale of a foul-mouthed, hard-drinking former debutante engagingly evokes a woman who lived like she flew--fast and dangerous." —Publisher's Weekly