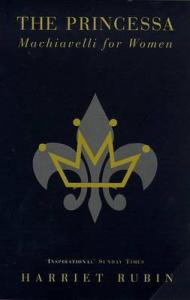 The Princessa: Machiavelli For Women

Can a woman become more powerful without becoming a man?

Women who triumph don't follow the rules; they flaunt them.

Harriet Rubin has studied the great female heroes in the wars of intimacy and public life, and distilled their behavior into a plan of action.  Whether confronting lovers, mothers, bosses, or competitors, The Princessa is a guide for the woman who feels she deserves far more than she has gotten through compromise.  While women have been socialized to avoid conflict, to be peacemakers, caretakers, and nurturers, Rubin shows how those very skills--sensitivity, emotional depth, and selflessness--can be codified into a new strategy of power.  The Princessa imparts inspiration and wisdom from history's great divas, poets, saints, sinners, and artists, as well as from leaders of the most important social movements in our time--women who, with the Furies inside them, in a spirit of justice and outrageousness, established their own rules of power.

Just as Machiavelli showed the prince how to use conflict in order to establish control, Rubin shows why women must act more like women.  "Think of mothers risking everything to defend their young," writes Rubin.  "Think of women overcoming all odds for love."  She shows how women, playing by men's rules, have only reinforced their own weakness.  So long as the gender wars are waged on male turf, women will always be fighting a losing battle.  It's time to win. Whatever your battlefield, The Princessa will incite you to act like a woman, fight like a woman, and live, at last, by your own rules.

Reviews:
"Rubin's insights are brilliant in their simplicity and effectiveness...a book sure to be underlined, dog-eared, and re-read for inspiration and aid."
—USA Today