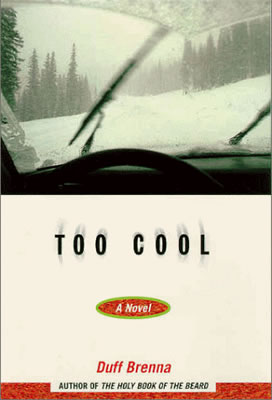 Duff Brenna's Too Cool is a tale with the feel of a classic. Set against the unforgiving landscape of blizzard-swept Colorado, Too Cool begins with the squeal of tires and adrenaline rush of a high-speed car chase. Elbert Earl Evans, known as Triple E, 16 years old, has busted out of reform school and taken off with his girlfriend, Jeanne Windriver, in a stolen Oldsmobile. Pursued by police, Triple E and Jeanne escape by turning onto a backwoods road, where the car eventually stalls, trapping the two youngsters miles from civilization in a deadly snowstorm. Faced with a situation of growing desperation, Triple E confronts the violence of his nature -- from his street skirmishes to the betrayal suffered at the hands of reform-school teachers who put their own dreams of glory ahead of his rehabilitation. Duff Brenna, the author of the acclaimed novels The Book of Mamie and The Holy Book of the Beard,  sensitively and compassionately portrays the troubled Triple E as a boy grown too fast into manhood, struggling to gain control over his explosive impulses, and discovering a vein of tenderness in his deep love for Jeanne. Taut, fast-paced and razor-sharp, Too Cool is a novel of undeniable power.

Reviews:
“Brenna has created a poignant portrait of an antisocial youth bent on violence and self destruction. Brenna takes readers on a captivating tour through the memories and dreams of Triple E .Pacing his narrative with the suspense of a thriller, Brenna writes grippingly and with uncanny insight into the mind and heart of this violent, unforgettable character who, despite his youth and the untapped good within him, is likely irredeemable."
—Publisher’s Weekly