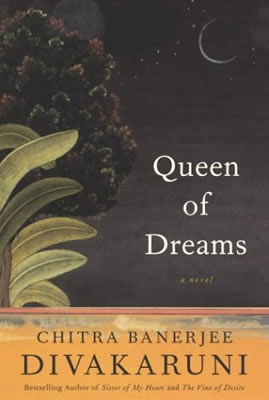 Queen of Dreams: A Novel

From the bestselling author of Sister of My Heart comes a spellbinding tale of mothers and daughters, love and cultural identity. Rakhi, a young painter and single mother, is struggling to come to terms with her relationship with ex-husband Sonny, a hip Bay Area DJ, and with her dream-teller mother, who has rarely spoken about her past or her native India. Rakhi has her hands full, juggling a creative dry spell, raising her daughter, and trying to save the Berkeley teahouse she and her best friend Belle own. But greater challenges are to come. When a national tragedy turns her world upside down and Rakhi needs her mother's strength and wisdom more than ever, she loses her in a freak car accident. But uncovering her mother's dream journals allows Rakhi to discover her mother's long-kept secrets and sacrifices, and ultimately to confront her fears, forge a new relationship with her father, and revisit Sonny's place in her heart.

Reviews:
“Chitra Divakaruni knows quite well how to pull her readers into her enchanting world….Magical….Beautiful and thought provoking….Her ever-present dream journals inject this novel with compelling mystery which gives a special luster to this universal theme.”
—Indo-American News


“In her magical novel, Chitra Banerjee Divakaruni portrays the complex relationship between a mother and daughter struggling with their identities as artists, mothers and women of South Asian origin living in Berkeley…In lyrical, poetic prose, Divakaruni shows how identity -- both individual and communal -- is equally shaped by loss and creation.”
—San Francisco Chronicle


“Divakaruni’s book shines…in its examination of the subtle, extrasensory connections between mothers and daughters that continue to develop even after death divides them. That deftly rendered otherworldly dimension transforms the novel from yet another story about the desi (expatriate Indian) experience in America into an emotionally heightened narrative, making that familiar desi longing seem new.”
—Los Angeles Times


“In her sensuous and poetic new novel, Queen of Dreams, critically acclaimed author Chitra Banerjee Divakaruni explores the psychic connections and hidden truths dreams can reveal about our inner and outer worlds. The same beguiling blend of magical realism and vivid imagery that attracted readers to her previous novels such as The Mistress of Spices and Sister of My Heart infuses this absorbing modern-day tale of family, identity and personal transformation with a mystical, otherworldly quality….Queen of Dreams illuminates the resonance of the past on the present and the role forgiveness in self-discovery. Divakaruni is a spellbinding storyteller whose lush language and inventive imagination transport us on an enlightening journey of transition, transformation and rebirth.”
—Bookpage


“Divakaruni’s writing has been translated into eleven languages, and by extension, different cultures as well. Her message of harmony and variety hasn’t been lost in translation. No matter what language, Divakaruni’s theme of unity through the mystique has been felt strongly on all cultural levels.”
—The Daily Californian


"Queen of Dreams is a riveting story, eloquently written. Divakaruni’s attention to detail in descriptive passages is beautifully telling without being at all overblown.”
—Boston Globe


“The fundamental mother-daughter story is women with golden threads of magical realism and includes a palette of dreamscapes, memories, messages from the afterlife, and the diffuse influences of the cultures of India and of the San Francisco Bay area. As is the case with Divakaruni’s earlier novels, this one could become a word-of-mouth favorite of book clubs far and wide.”
—Library Journal (starred)


“Spiked with elements of mystery, suspense and the supernatural, Divakaruni’s sixth novel is a pleasantly atypical tale of self-discovery….Divakaruni does a good job working current issues into the novel and avoids synthetic characterization, creating a free-flowing story that will captivate readers.”
—Publisher’s Weekly


“Poet and novelist Divakaruni (The Conch Bearer, 2003, etc.) stirs up a tasty curry that’s half-mystery, half-fantasy in a clever tale of a young woman trying to sort out the mystery of her mother’s death—and life….Richly textured and artfully told through the varied perspectives of believable characters.”
—Kirkus Reviews


“Divakaruni’s socially and psychologically precise fiction always possesses a mystical dimension, whether overtly, as in The Mistress of Spices (1996), or poetically, as in The Vine of Desire (2001), a beguiling and inspiring trait she shares with Alice Hoffman, albeit from a Hindu perspective. Now Divakaruni’s signature fusion of the realistic and the cosmic achieves a new intensity in her most riveting and politically searing novel to date. … Writing, as always, with wit and lyricism, Divakaruni masterfully illuminates the tangible and the numinous, the abruptly changing present and the deep past in a page-turner lush with emotional, cultural, and spiritual insights.”
—Booklist