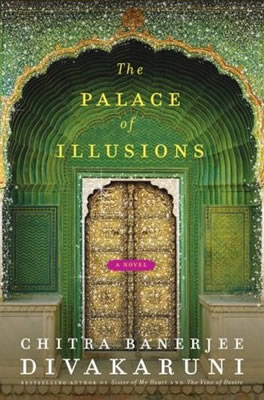 The Palace of Illusions

A reimagining of the world-famous Indian epic, the Mahabharat, told from the point of view of an amazing woman.

Relevant to today's war-torn world, The Palace of Illusions takes us back to a time that is half history, half myth, and wholly magical. Narrated by Panchaali, the wife of the legendary Pandavas brothers in the Mahabharat, the novel gives us a new interpretation of this ancient tale.

The novel traces the princess Panchaali's life, beginning with her birth in fire and following her spirited balancing act as a woman with five husbands who have been cheated out of their father's kingdom. Panchaali is swept into their quest to reclaim their birthright, remaining at their side through years of exile and a terrible civil war involving all the important kings of India. Meanwhile, we never lose sight of her strategic duels with her mother-in-law, her complicated friendship with the enigmatic Krishna, or her secret attraction to the mysterious man who is her husbands' most dangerous enemy. Panchaali is a fiery female redefining for us a world of warriors, gods, and the ever-manipulating hands of fate.

Reviews:
“The Palace of Illusions is not only an exciting, action-packed read, but also an educating one, and will likely encourage those curious enough to delve into the original Mahabharata.”
—Toronto Star


“[A] beautifully wrought tale…. Divakaruni’s feminist reading of Indian lore offers readers a magical lens into the political interplay of gender, castes, birthright and life in the monarchy. Divakaruni is an author to watch.”
—Rocky Mountain News


"The Palace of Illusions is unique, amongst Divakaruni's very best. It is particularly refreshing to read an author who breaks the mold as clearly as Divakaruni does... A creative, illuminating feminist work that compels us to re-examine the original text...As in all great cathartic tales, Divakaruni's novel grasps our attention from beginning to end and is a healing, aesthetic experience.”
—India Currents


“The Palace of Illusions by Chitra Banerjee Divakaruni is as sprawling and bright a gem as the Hope Diamond – a mythic tale brimming with magic, treachery, and unrequited love…Who better to attempt the feat of transforming a centuries-old cultural icon into a personal, modern story than Divakaruni, a professor of English at the University of Houston and author of numerous award-winning works, including the luscious novel The Mistress of Spices and the bestselling Sister of my Heart.  Divakaruni’s sentences dazzle; the images she creates are masterful….”
—Los Angeles Times Book Review


“Divakaruni has woven a lyrical tale imbued with the scent of ancient incense, yet simultaneously rooted in modern-day relevancy. Brimming with betrayals, religious fervor and war-torn streets, The Palace of Illusions is a journey experienced from the vantage point of Panchaali, a powerful woman driven by love, honor and, in the end, a fate that unfolds despite her resolve.”
—Bookpage


“By rendering the women characters as complexly as the men, and fully illuminating the ‘insanity of war’ and the fragility of civilization, Divakaruni’s historic and transporting variation adds new and truly revelatory psychological and social dimensions to the great epic’s indelible story of sacrifice and spiritual awakening. Divakaruni has triumphantly fulfilled a profound mission.”
—Booklist


“Divakaruni has taken a male-centered story and breathed new life into its female characters, giving us a rich tale of passion and love, power and weakness, honor and humiliation.  Whether or not readers are familiar with the Mahabharat epic, still fascinating and relevant several millennia on, they will enjoy this entertaining, insightful and suspenseful story. Recommended for all fiction collections.”
—Library Journal (starred)


“The Palace of Illusions…is as grand and tragic as the epic poems by Homer. The story is complex, as political relationships grow and develop, and friends and enemies are created, leading to battles and wars that will eventually destroy them all…I was captivated by the tragic storyline and the fate into which Panchaali was born. This admirable attempt to recreate the epic Mahabharat from the viewpoint of a strong woman is Chitra Banerjee Divakaruni’s best work yet.”
—Bookreporter.com


“Divakaruni offers a quasi-feminist retelling of the great Hindu text known as the Mahabharat.…an intimate, feminine portrait that is both contemporary and timeless. An ambitious project effectively executed.”
—Kirkus Reviews