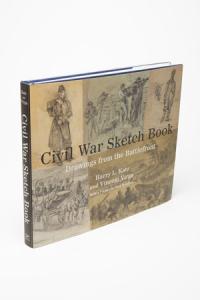 A landmark collection featuring rare and sensational images of the Civil War.

At a time before the camera lens could capture the frenzy and terror of battle action, illustrators known as “Special Artists”?among them such famous draftsmen as Winslow Homer and Thomas Nast?created for the American public some of the most important and lasting images of the Civil War. Reporting for newspapers like Harper’s Weekly and Frank Leslie’s Illustrated News, the Specials brought a visceral immediacy to the clash, presenting rich and nuanced images of soldiers in the camps and sweeping panoramas of the great battles. The illustrations span the war and its many theaters, including rarely seen views of Shiloh, Antietam, Vicksburg, and Gettysburg, and the famous stampede of Union soldiers fleeing the Rebels at Bull Run. Gathering these images for the first time in fifty years, Civil War Sketch Book gives readers the sense that they are touching history, for the illustrations (some even stained with soldiers’ blood) represent priceless artifacts from our nation’s greatest conflict. 250 color illustrations

Reviews:
"Katz and Virga help us envision the Civil War as contemporaries would have visualized it through the magazines they read."
—Booklist


"Handsome volume—also a landmark in the study of pictorial journalism—a special immediacy that will appeal to Civil War buffs and many others. Most highly recommended."
—Library Journal


“On the 150th anniversary of America’s darkest internal conflict, we are hauntingly reminded of our nation’s violent past through the eyewitness illustrations in Civil War Sketch Book: Drawings from the Battlefront. […] This rich collection of special images, spanning 1861 through 1865, truly documents the start of pictorial journalism. Katz, the former head curator of the Library of Congress, and the prolific picture book author Virga, have teamed together to build a must have book for any noted American history collection.”
—American Society of Picture Professionals