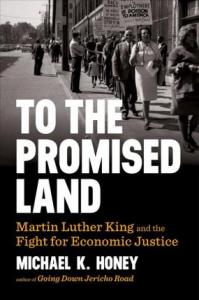 To the Promised Land: Martin Luther King and the Fight for Economic Justice

Beyond King’s Dream of civil and voting rights lay a revolutionary vision of economic justice.

More than fifty years ago an assassin’s bullet robbed us of one of the most eloquent voices for twentieth-century human rights and justice. Drawing on a new generation of scholarship about the civil rights era, To the Promised Landgoes beyond the iconic view of King as an advocate of racial harmony to explore his profound commitment to the poor and working class, and his call for “nonviolent resistance” to all forms of oppression, including economic injustice.

Phase one of that struggle led to the Civil Rights and Voting Rights Acts. In phase two, King organized poor people and demonstrated for union rights, while seeking a “moral revolution” to replace the self-seeking individualism of the rich with an overriding concern for the common good. To the Promised Landasks us to think about what it would mean to truly fulfill King’s legacy and move toward what he called “the Promised Land” in our own time.

Reviews:
"Much has been written about King, of course, but this exemplary book stands out for the way scholar and former activist Honey shows class and race as dual focuses of King's efforts...An important contribution to our understanding of King and his legacy."
—Booklist


"[A] richly detailed work...[Honey's] book contains both insight and inspiration to activists of many stripes."
—Publisher's Weekly


“Dr. Martin Luther King Jr. was a revolutionary, fighting to end social injustice and economic inequality, and a catalyst for the ongoing rebellions of the poor. Michael Honey tells a compelling story of militant, revolutionary love in action. This is a dangerous book.”
—Robin D. G. Kelley, author of Freedom Dreams: The Black Radical Imagination


“To the Promised Land helps us to remember King as a prophet for poor and working-class people, as we carry on that campaign against racism and poverty in our own times. A terrific book.”
—Timothy B. Tyson, author of The Blood of Emmett Till


“A portrait of King that is more accurate, more troubling, and more needed than ever before.”
—William P. Jones, author of The March on Washington


“Public memory has played tricks on King’s legacy, turning his fierce struggle against systemic racism into a quest for colorblindness. Honey restores the man in full, one who perceived desegregation as a first step on a longer path toward full citizenship and economic justice. To the Promised Land gives us a longer, messier, and unfinished civil rights movement and a truer portrait of King’s radical hopes. It is an inspiration for the work ahead.”
—Glenda Elizabeth Gilmore, author of Defying Dixie: The Radical Roots of Civil Rights, 1919–1950


“Michael Honey’s important and timely new book recovers the fullness of King’s social Christian vision. More than just Jim Crow’s most formidable detractor, he was one of capitalism’s most insistent and incisive critics. Honey leaves no doubt that, in our new Gilded Age, King’s dream, marked by a longing for both racial and economic justice, remains as relevant as ever.”
—Heath W. Carter, author of Union Made: Working People and the Rise of Social Christianity in Chicago