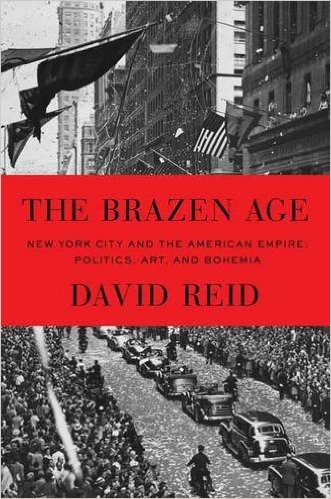 A brilliant, sweeping, and unparalleled look at the extraordinarily rich culture and turbulent politics of New York City between the years 1945 and 1950, The Brazen Age opens with Franklin Delano Roosevelts campaign tour through the citys boroughs in 1944. He would see little of what made New York the capital of modernitythough the aristocratic FDR was its paradoxical avatara city boasting an unprecedented and unique synthesis of genius, ambition, and the avant-garde. While concentrating on those five years, David Reid also reaches back to the turn of the twentieth century to explore the citys progressive politics, radical artistic experimentation, and burgeoning bohemia.

From 1900 to 1929, New York City was a dynamic metropolis on the rise, and it quickly became a cultural nexus of new architecture; the home of a thriving movie business; the glittering center of theater and radio; and a hub of book, magazine, and newspaper publishing. In the 1930s, the rise of Hitler and World War II would send some of Europes most talented men and women to Americas shores, vastly enriching the fields of science, architecture, film, and arts and lettersthe list includes Albert Einstein, Erwin Panofsky, Walter Gropius, George Grosz, Andr Kertsz, Robert Capa, Thomas Mann, Hannah Arendt, Vladimir Nabokov, and John Lukacs.

Reid draws a portrait of the frenzied, creative energy of a bohemian Greenwich Village, from the taverns to the salons. Revolutionaries, socialists, and intelligentsia in the 1910s were drawn to the highly provocative monthly magazine The Masses, which attracted the eras greatest talent, from John Reed to Sherwood Anderson, Djuna Barnes, John Sloan, and Stuart Davis. And summoned up is a chorus of witnesses to the ever-changing landscape of bohemia, from Malcolm Cowley to Anas Nin. Also present are the pioneering photographers who captured the city in black-and-white: Berenice Abbotts dizzying aerial views, Samuel Gottschos photographs of the waterfront and the citys architectural splendor, and Weegees masterful noir lowlife.

But the political tone would be set by the next president, and Reid looks closely at Thomas Dewey, Henry Wallace, and Harry Truman. James Forrestal, secretary of the navy under Roosevelt, would be influential in establishing a new position in the cabinet before ascending to it himself as secretary of defense under Truman, but not before helping to usher in the Cold War.

With The Brazen Age, David Reid has magnificently captured a complex and powerful moment in the history of New York City in the mid-twentieth century, a period of time that would ensure its place on the world stage for many generations.


"No less than Paris in the 1920’s, New York City in the 1940’s was the center of the world, according to this exhilarating account of the city during that decade. Reid begins his rich history with a bang […] Having read or seen nearly every artifact of this period, Reid delivers his opinion in a score of unrelated but brilliant chapters on iconic New York individuals (Berenice Abbott, Weegee), groups (returning soldiers, homosexuals), politics (the 1948 elections, leftist magazines), and bohemia (Greenwich village again and again). A historical tour de force."
– Kirkus Reviews (starred)


"A truly great book. David Reid's narrative is magnificently rich and complex, but his thesis is simple: with Europes metropolises in ruins in 1945, New York became the melting pot of global avant-gardes, the primate city of both an age and an empire. Like Diego Riveras great destroyed mural at Rockefeller Center, The Brazen Age magically captures the clamoring convergence of genius, power, and revoltof dreams, manifestoes, and defeatsthat made Manhattan the central power plant of late modernity."
--Mike Davis, author of City of Quartz: Excavating the Future in Los Angeles