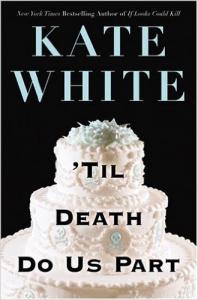 Til Death Do Us Part: A Bailey Weggins Mystery

True crime writer and sometime-sleuth Bailey Weggins took the world by storm in Kate White's sexy and suspenseful debut novel, If Looks Could Kill. Now, in Bailey's latest outing, she takes the plunge into a world of domestic divas and deadly nuptial doings... When she gets a call from Ashley Hanes on a frigid night, Bailey expects to be hit up for fashion show tickets. Instead Ashley reveals that two bridesmaids from Peyton Cross's wedding have recently died in freak accidents...and Ashley is terrified she's next. A bridesmaid herself-with the dress to prove it-Bailey dashes off to Ivy Hill Farm, the home of Peyton's catering empire in Greenwich, Connecticut. Bailey's barely warmed up after the cold drive before another bridesmaid takes a walk down the aisle of no return. Now following a dangerous trail of clues that will take her from New York's trendy Lower East Side to a fabulous oceanfront hotel in Miami, Bailey could become the headline of the next true crime story: Four Funerals and a Wedding.

Reviews:
“The ending of the book is heart pounding drama at its best, as author Kate White shows us just how good a murder mystery should be written. Be prepared to keep reading. You won’t be able to put this one down for long!”
—Shelf Life


“White paints an intriguing picture of the Eastern establishment --- a milieu she, as editor of Cosmopolitian, presumably knows well.”
—San Diego Union Tribune


“Cosmopolitan editrix White is adept at describing the land of trophy wives, mansions and lemon tarts. And her slick, readable tale is as fun as nabbing a couture gown at a sample sale.”
—Entertainment Weekly


“The third cleverly plotted Bailey Weggins mystery from Cosmopolitan editor-in-chief White (after 2003's A Body to Die For) provides a juicy inside look at the well-to-do matrons of tiny Greenwich, Conn…Through her heroine's funny, self-deprecating voice, the author deliciously conveys the milieu of moneyed Greenwich-ites (and their New York counterparts)… White keeps everything light, but she also sustains a real sense of mystery, with less than obvious motives and positively suspenseful denouement. Ultimately, the pleasures here are more gossipy than criminal.”
—Publishers Weekly


“White’s take on Four Funerals and a Wedding is a gift to every girl who’s ever looked for another reason to avoid a bridesmaid…Another dish of smooth, upscale gossip.”
—Kirkus Review