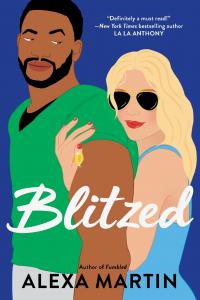 According to Brynn Larson, Maxwell Lewis is more trouble than he's worth. She doesn't care if he's a football god with a rock-hard body that brings most women to their knees. After an encounter that ends poorly, she's not interested in giving him a second chance. The last thing Brynn expects is for him to turn up at her bar months later, hat in hand. It doesn't matter if he brings more customers to her business--she's still not going on a date with him.

Maxwell knows he made a mistake. He'd been waiting to make his move on Brynn since the day he laid eyes on her and he was finally ready to go for it until he screwed up. He wishes he could tell her the truth about what happened that night, but he just can't. He can't tell anyone, so he'll make amends and hope she'll forgive him.

Brynn's not like other women, though. Playing for the Mustangs doesn't impress her and gifts make her scoff. Max will have to bring his A game if he hopes to win.


• An Amazon Best Romance of December

• One of Popsugar's Best Books to Read This Winter 2019

• One of Refinery 29's Best Books of December

Reviews:
"Martin continues her Player series, following Fumbled (2019) and scores again with this perfectly blended sporty-spicy/rom-com cocktail that’s so good, you could name a drink after it."
—Booklist (starred)

"What the slow-burning love story lacks in drama it makes up for with heart. Readers will be delighted by this sweet romance."
—Publishers Weekly

“Blitzed — the third in the series — is an electrifying cocktail of girl power, adorable romance, and enough drama to rival a reality show.”
—NPR

“Alexa Martin’s smart, bubbly books are found at the intersection of sports and rom-coms.”
—Refinery29

“Martin captures the reality of the sexy, exciting and volatile culture of professional sports.”
—BookPage