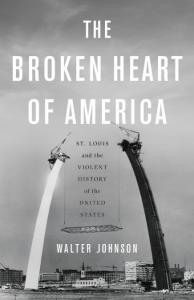 The Broken Heart of America: St. Louis and the Violent History of the United States

From an award-winning historian, a groundbreaking portrait of pervasive exploitation and radical resistance in America, told through the turbulent history of St. Louis

From Lewis and Clark’s 1804 expedition to the 2014 uprising in Ferguson, American history has been made in St. Louis. And as Walter Johnson shows in this searing book, the city exemplifies how imperialism, racism, and capitalism have persistently entwined to corrupt the nation’s past.

St. Louis was a staging post for Indian removal and imperial expansion, and its wealth grew on the backs of its poor black residents, from slavery through redlining and urban renewal. But it was once also America’s most radical city, home to anti-capitalist immigrants, the Civil War’s first general emancipation, and the nation’s first general strike — a legacy of resistance that endures.

A blistering history of a city’s rise and decline, The Broken Heart of America will forever change how we think about the United States.


• Highlighted in the Spring 2020 preview issue of Publishers Weekly

“[An] exhaustive and politically minded history of St. Louis…Johnson makes a persuasive case that ‘St. Louis has been the crucible of American history,’ and his celebration of the city’s defiant black culture heightens the book’s potency…Incisive and troubling.”
—Publishers Weekly

“This book is a magisterial history of the emergence and development of racial capitalism and the rise and decline of American empire examined through the lens of St. Louis. The complex dynamics of eviction, extraction, and exploitation as well as resilience and resistance are laid bare from the indigenous city of Cahokia in the eleventh century (larger than then London) to St. Louis, a frontier post and later metropolis of the US western empire. From ruling class elites Thomas Hart Benton and Harland Bartholomew and oppositional artists Kate Chopin and Tef Poe to black and socialist insurgents, The Broken Heart of America tells the best story of America that we have in the spirit of W.E.B. Du Bois. Walter Johnson is one of our very few great US historians!”
—Cornel West

“Walter Johnson’s latest is a masterpiece that both haunts and inspires: at once a personal reckoning; a sweeping 200-year history of removal, racism, exclusion, and extraction; and a story that powerfully lifts up the human beings who, in 2014, stood together in Ferguson to demand accountability for the layered injustices that have so scarred not just one city—but America itself.”
—Heather Ann Thompson, Pulitzer–prize winning author of Blood in the Water: The Attica Prison Uprising of 1971 and its Legacy

“When it comes to understanding the power dynamics that sparked the Ferguson Uprising in St. Louis, this is absolutely the most important book you'll read. Walter Johnson has a Baldwin-esque ability to describe the raw emotions of Black life in the city. With stories heartbreaking yet riveting—told by someone brave enough to share them—he exposes the history of white supremacy and capitalism, class struggle and race, and Black rebellions both before and after Ferguson. In the era of fake news and mock revolutions, this book is the truth.”
—Tef Poe, musician, activist, and cofounder of Hands Up United

“The thread that runs through this entire book is the historical relationship between US imperialism, Indian removal, and anti-Black racism. Although also a granular history of the city of St. Louis, The Broken Heart of America is a deep history of the United States’ continental empire with St. Louis at the center of economic and military operations. This may be the most important book on US history you will read in your lifetime.”
—Roxanne Dunbar-Ortiz, author of An Indigenous Peoples’ History of the United States

“Walter Johnson has written a magisterial book. Using the sordid history of St. Louis, he weaves a tale of violence and betrayal—a story of the removal of peoples and the taking of land by force and by zoning—that helps the reader understand the glaring contradictions that define the United States today. Even the killing of Michael Brown in 2014 must be understood against the backdrop of the long history of greed, extraction, and racism that shaped the city of St. Louis and this country. The Broken Heart of America isn’t a dispassionate treatment of historical facts: Johnson has written a searing history that matters deeply to him, a native son, and it should matter to all of us.”
—Eddie S. Glaude, author of Begin Again: James Baldwin’s America and Its Urgent Lessons for Our Own

“Gateway. Ghetto. Ground Zero. Blues. This is St. Louis, unmoored from myths and exposed by one of our finest historians. Walter Johnson finds in this romanticized and reviled city the nucleus of racial capitalism and American empire and a story of dispossession, disaster, extraction, containment, and death—lots of death. A heartland broken, but not a heartless tale, for it is here we discover Black, Brown, and Native communities with heart, workers with heart, organizers fighting to bring justice to the heart of the city and the nation. After reading this book, you will never think of St. Louis or U.S. history the same way.”
—Robin D. G. Kelley, author of Thelonious Monk: The Life and Times of an American Original