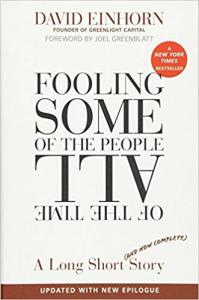 Fooling Some of the People All of the Time: A Long Short Story

A revealing look at Wall Street, the financial media, and financial regulators by David Einhorn, the President of Greenlight Capital

Could 2008's credit crisis have been minimized or even avoided? In 2002, David Einhorn-one of the country's top investors-was asked at a charity investment conference to share his best investment advice. Short sell Allied Capital. At the time, Allied was a leader in the private financing industry. Einhorn claimed Allied was using questionable accounting practices to prop itself up. Sound familiar? At the time of the original version of Fooling Some of the People All of the Time: A Long Short Story the outcome of his advice was unknown. Now, the story is complete and we know Einhorn was right. In 2008, Einhorn advised the same conference to short sell Lehman Brothers. And had the market been more open to his warnings, yes, the market meltdown might have been avoided, or at least minimized.

Fooling Some of the People All of the Time is an important call for effective government regulation, free speech, and fair pla


“In the world of finance, as in the worlds of politics or science, free speech and open debate are essential. Sadly, our current system is rigged against bearers of bad news, and short sellers are an oppressed minority. David Einhorn’s amazing story of scam artists, corporate doubletalk, clueless regulators, and sleazy lawyers is a gripping narrative. A great read.”
—Owen Lamont, Fellow, International Center for Finance, Yale School of Management