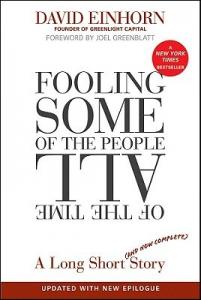 Fooling Some of the People All of the Time: A Long Short (and Now Complete) Story

In 2002, David Einhorn, the President of Greenlight Capital, gave a speech at a charity investment conference to benefit a children's cancer hospital. He was asked to share his best investment idea, so he did. He described his reasons why Greenlight had sold short the shares of Allied Capital, a leader in the private finance industry. Greenlight bet that the stock would decline because the company's business was in trouble and its accounting was corrupt. Einhorn's speech was so compelling that the next day, when the New York Stock Exchange opened for trading, Allied's shares remained closed. So many investors wanted to sell or short the stock that the NYSE could not balance all the sell orders to open Allied’s trading in an orderly fashion.

What followed was a firestorm of controversy. Allied responded with a Washington, D.C.–style spin-job— attacking Einhorn and disseminating half-truths and outright lies. Rather than protect investors by reviewing Einhorn's well-documented case against Allied, the SEC—at the behest of the politically connected Allied— instead investigated Einhorn for stock manipulation. Over the ensuing six years, the SEC allowed Allied

to make the problem bigger by approving more than a dozen additional stock offerings that raised over $1 billion from new investors. Undeterred by the spin-job, lies, and investigations, Greenlight continued its research after the speech and discovered Allied’s behavior was far worse than Einhorn ever suspected— and, shockingly, it continues to this day.

Fooling Some of the People All of the Time is the gripping chronicle of this ongoing saga. Page by page, it delves deep inside Wall Street, showing how the $6 billion hedge fund Greenlight Capital conducts its investment research and detailing the maneuvers of an unscrupulous company. Along the way, you'll witness feckless regulators, compromised politicians, and the barricades our capital markets have erected against exposing misconduct from important Wall Street customers. You will also discover the immense difficulties that prevent the government from sanctioning politically connected companies—making future Enrons inevitable. This revealing book shows the failings of Wall Street: its investment banks, analysts, journalists, and especially our government regulators.

“This book is a must-read for any investor who wants to know how far some companies will go in their quest to keep the real story from coming out.”
—Herb Greenberg, Senior Columnist, MarketWatch.com

“In the world of finance, as in the worlds of politics or science, free speech and open debate are essential. Sadly, our current system is rigged against bearers of bad news, and short sellers are an oppressed minority. David Einhorn’s amazing story of scam artists, corporate doubletalk, clueless regulators, and sleazy lawyers is a gripping narrative. A great read.”
—Owen Lamont, Fellow, International Center for Finance, Yale School of Management