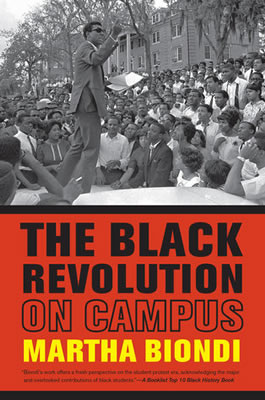 The Black Revolution on Campus

The Black Revolution on Campus is the definitive account of an extraordinary but forgotten chapter of the black freedom struggle. In the late 1960s and early 1970s, Black students organized hundreds of protests that sparked a period of crackdown, negotiation, and reform that profoundly transformed college life. At stake was the very mission of higher education. Black students demanded that public universities serve their communities; that private universities rethink the mission of elite education; and that black colleges embrace self-determination and resist the threat of integration. Most crucially, black students demanded a role in the definition of scholarly knowledge.

Martha Biondi masterfully combines impressive research with a wealth of interviews from participants to tell the story of how students turned the slogan â€œblack powerâ€ into a social movement. Vividly demonstrating the critical linkage between the student movement and changes in university culture, Biondi illustrates how victories in establishing Black Studies ultimately produced important intellectual innovations that have had a lasting impact on academic research and university curricula over the past 40 years. This book makes a major contribution to the current debate on Ethnic Studies, access to higher education, and opportunity for all.

Reviews:
"Thoroughly researched, beautifully written, and a fascinating piece of history . . . an exceptional piece of scholarship, and a book greatly worth reading."
—Washington Spectator


"Biondi's book is a very powerful chronicle of the struggle and strategizing that moved seemingly immovable institutions toward change."
—Souls


"Black Revolution on Campus is both timely and brilliantly conceived…Martha Biondi understands the history of Black Studies as both a political and intellectual movement that extends beyond the ivy covered walls into the Ghettos of North America. Black Revolution on Campus sheds light on the changing and contested nature of African American identity and racial conditions in the United States as a whole.”
—Robin D. G. Kelley, author of Thelonious Monk


“Ambitious and exciting”
—Thomas J. Sugrue, Professor of History and Sociology at the University of Pennsylvania


“Writing with clarity and power Professor Biondi locates the uprisings of Black students for open admissions, Black Studies, community justice, and international solidarity within the broader frame of the Black Freedom Movement and the fight for democracy, simultaneously rescuing the student movement of the 1960s from total whiteness. This book will be essential reading for students then and now, for those who seek the vital link between education and freedom, and for anyone longing for ways to lurch toward greater justice today.”
—William Ayers and Bernardine Dohrn, co-authors of Race Course: Against White Supremacy