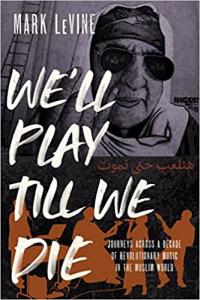 We'll Play till We Die: Journeys across a Decade of Revolutionary Music in the Muslim World

In his iconic musical travelogue Heavy Metal Islam, Mark LeVine first brought the views and experiences of a still-young generation to the world. In We'll Play till We Die, he joins with this generation's leading voices to write a definitive history of the era, closing with a cowritten epilogue that explores the meanings and futures of youth music from North Africa to Southeast Asia.

We'll Play till We Die dives into the revolutionary music cultures of the Middle East and larger Muslim world before, during, and beyond the waves of resistance that shook the region from Morocco to Pakistan. This sequel to Mark LeVine's celebrated Heavy Metal Islam shows how some of the world's most extreme music not only helped inspire and define region-wide protests, but also exemplifies the beauty and diversity of youth cultures throughout the Muslim world.

Two years after Heavy Metal Islam was published in 2008, uprisings and revolutions spread like wildfire. The young people organizing and protesting on the streets—in dozens of cities from Casablanca to Karachi—included the very musicians and fans LeVine spotlighted in that book. We'll Play till We Die revisits the groundbreaking stories he originally explored, sharing what has happened to these musicians, their music, their politics, and their societies since then. The book covers a stunning array of developments, not just in metal and hip hop scenes, but with emo in Baghdad, mahraganat in Egypt, techno in Beirut, and more. LeVine also reveals how artists have used global platforms like YouTube and SoundCloud to achieve unprecedented circulation of their music outside corporate or government control. The first collective ethnography and biography of the post-2010 generation, We'll Play till We Die explains and amplifies the radical possibilities of music as a revolutionary force for change.


"Through critical, collaborative, and engaged scholarship, Mark LeVine shows the central role played by music in struggles for social change in the modern Muslim world. Carefully researched and eloquently written discussions of heavy metal and hip hop in Palestine and Pakistan, in Iran, Egypt, and Indonesia, and from the Maghreb to the Mediterranean coast of Lebanon show how history can happen in unexpected ways and in unexpected places. We'll Play till We Die reveals how a radical and sometimes even revolutionary generation of young people used musical improvisation and innovation as a means of culturally organizing that later proved indispensable to them in mobilizing politically." —George Lipsitz, author of Time Passages and Dangerous Crossroads

"What does revolution sound like? LeVine knows. He is that rare music writer who is not afraid of politics; a scholar-musician not afraid to play. He gave us a glimpse of revolution in his astonishing Heavy Metal Islam and now has followed up with a thrilling, explosive, finely grained exploration of the Muslim underground music scene in the wake of the Arab Spring. As with any collaborative mixtape, read this book from beginning to end, and then rewind." —Robin D. G. Kelley, author of Thelonious Monk: The Life and Times of an American Original

"LeVine's We'll Play till We Die is a brilliant testimony to the power of Extreme Youth Music as a weapon of resistance, an instrument of hope, and an irrepressible act of revolution across the Middle East." —Mira Jacob, author of Good Talk and The Sleepwalker's Guide to Dancing

"We'll Play till We Die is a powerful account of Muslim youth culture over the last decade, tracing how young Muslims from Morocco to Pakistan forge music for political struggle. LeVine is a witty, pissed-off audiohead who crisscrosses the Muslim-majority world, leaving no musical stone unturned." —Hisham Aidi, author of Rebel Music: Race, Empire, and the New Muslim Youth Culture

"When LeVine wrote Heavy Metal Islam over a decade ago, he imagined a day when the youth of the Middle East would rise up with one voice—channeling the ethos of the rock and roll and hip hop music that gives pulse to the region—and transform their world for better or worse. Now that we have seen that day come and go, LeVine's new, deeply personal examination of how music has given voice to both the despair and the hope of this youth generation is even more relevant than it was a decade ago." —Reza Aslan, author of Zealot: The Life and Times of Jesus of Nazareth