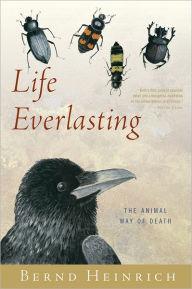 From one of the finest naturalist/writers of our time, a fascinating investigation of Nature's inspiring death-to-life cycle.

When a good friend with a severe illness wrote, asking if he might have his "green burial" at Bernd Heinrich's hunting camp in Maine, it inspired the acclaimed biologist to investigate a subject that had long fascinated him. How exactly does the animal world deal with the flip side of the life cycle? And what are the lessons, ecological to spiritual, raised by a close look at how the animal world renews itself? Heinrich focuses his wholly original gaze on the fascinating doings of creatures most of us would otherwise turn away from, field mouse burials conducted by carrion beetles; the communication strategies of ravens, "the premier northern undertakers"; and the "inadvertent teamwork" among wolves and large cats, foxes and weasels, bald eagles and nuthatches in cold-weather dispersal of prey. Heinrich reveals, too, how and where humans still play our ancient and important role as scavengers, thereby turning--not dust to dust--but life to life.


“Heinrich is an equal-opportunity narrator, engaged as much by the playful behaviors of his animal subjects as their undertaking skills…Heinrich wears many hats in this book – scientist, activist, philosopher and sleuth.”
—Portland Press Herald


“A field guide of exquisite detail and a thoughtful meditation on the connectedness of all things.”
—The Boston Globe


“[Life Everlasting] raises moral and philosophical concerns about the role humans have played in the death cycle considering that “one of the most damaging practices affecting the undertakers’ [animal scavengers] livelihood may be our deliberate removal of carcasses that have, throughout evolutionary history, been left to return to the earth.” It’s an intriguing perspective on the practice of burying our dead in concrete tombs… Life Everlasting scrutinizes a subject that many might find taboo and questions whether modern burial practices are for the best.”
—Shelf Awareness


“Ranging from the importance of ravens and vultures as ‘undertakers’ to how dead salmon lead to the great forests of Alaska and the Pacific Northwest, Life Everlasting is a worldwide tour of the role of death in nature that is consistently fascinating and fun to read.”
—Seattle Times


“A thought-provoking book reminding us that we are all part of life everlasting.”
—Booklist (starred)


“Slim but moving... This engaging and thoughtful book makes the case that this truth is not only scientifically relevant but personally, and spiritually, too: by looking to nature, humans can ‘transcend individual deaths,’ and find a deeper meaning in our earthly existence.”
—Publishers Weekly


“If you can’t spend an afternoon watching beetles and hearing Heinrich’s stories on how nature recycles its dead, this book is the next best thing.”
—Kirkus Review


“Biologist Heinrich follows up Mind of the Raven: Investigations and Adventures with Wolf-Birds, an excellent study of wild birds, with this book. While the title conjures a religious tone, the work is actually a careful examination of biological recycling, the breaking down and reuse of the dead bodies of animals and plants....Heinrich writes with insight in entertaining prose that still manages to be scientific. Highly recommended.”
—Library Journal (starred)


“With a combination of the erudition of a professor (Dr. Heinrich is in fact Professor Emeritus in the Department of Biology at the University of Vermont), the inquisitiveness of a field biologist, and the ground-level experience of a naturalist and hunter, Dr. Heinrich leads his readers through a selection of his experiences with and investigations into just how this cycle plays out continually all around us – and in a final concluding chapter, reminds us how we are not outside of it, despite how much we may try to convince ourselves that we are.”
—The Well Read Naturalist


“I hope and expect that thousands of young people will read Bernd Heinrich's books, have the same reaction I've had, and go out and cultivate themselves into scientists. He'll make better naturalists of older folks, too, and, in "Life Everlasting," help us find peace with mortality and the eventual return of our material substance to the biological world that produced us.”
—All Things Natural