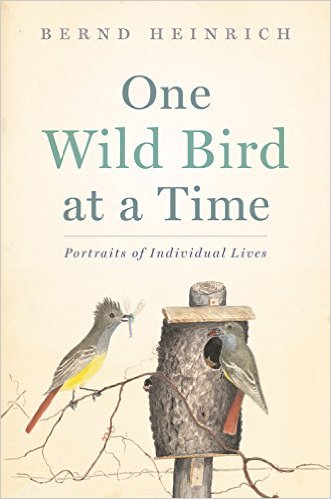 One Wild Bird at a Time: Portraits of Individual Lives

In his modern classics One Mans Owl and Mind of the Raven, Bernd Heinrich has written memorably about his relationships with wild ravens and a great horned owl.

In One Wild Bird at a Time, Heinrich returns to his great love: close, day-to-day observations of individual wild birds. There are countless books on bird behavior, but Heinrich argues that some of the most amazing bird behaviors fall below the radar of what most birds do in aggregate. Heinrichs passionate observations [that] superbly mix memoir and science (New York Times Book Review) lead to fascinating questions and sometimes startling discoveries. A great crested flycatcher, while bringing food to the young in their nest, is attacked by the other flycatcher nearby. Why? A pair of Northern flickers hammering their nest-hole into the side of Heinrichs cabin deliver the opportunity to observe the feeding competition between siblings, and to make a related discovery about nest-cleaning. One of a clutch of redstart warbler babies fledges out of the nest from twenty feet above the ground, and lands on the grass below. It cant fly. What will happen next?


“A professor of biology at the University of Vermont, and one of the country’s most distinguished writer-naturalists, Mr. Heinrich…draws on field notes kept over many years for 17 bird investigations…Mr. Heinrich writes about the Maine woods around his cabin as if they were an extended backyard whose inhabitants are old familiars…While there is often a riddle at the heart of his explorations, his chapters are essentially what he calls them: portraits. He can certainly tell a story when there is one but is often content to retain the meandering form of the journals he culls, supplementing his entries with his own sketches, drawings and paintings.”
—Wall Street Journal


â€‹“An eminent biologist shares the joys of bird-watching and how observing the anomalous behaviors of individual birds has guided his research…An engaging memoir of the opportunities for doing scientific research without leaving one’s own backyard.”
—Kirkus Reviews


"Heinrich looks closely, with his trademark hands-and-knees science at its most engaging, [delivering] what can only be called psychological marvels of knowing."
—Boston Globe