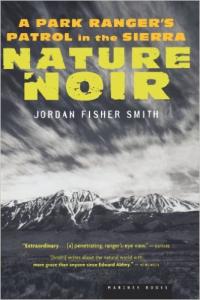 Nature Noir: A Park Ranger's Patrol in the Sierra

A nature book unlike any other, Jordan Fisher Smith's startling account of fourteen years as a park ranger thoroughly dispels our idealized visions of life in the great outdoors. Instead of scout troops and placid birdwatchers, Smith's beat -- a stretch of land that has been officially condemned to be flooded -- brings him into contact with drug users tweaked out to the point of violence, obsessed miners, and other dangerous creatures. In unflinchingly honest prose, he reveals the unexpectedly dark underbelly of patrolling and protecting public lands.

Reviews:
"Eloquently meditative….Nature Noir slides effortlessly forward. Smith relishes the physical detail, whether the subject is geology, a cloud of migrating ladybugs, the unrelenting dust, or the little napkins that his fellow rangers place on their hoods to hold their doughnuts. His voice gains authority through its cadence and understatement….Another writer might turn these experiences into a bitter, tumbling rant. Smith instead scours away quietly with his words, steadfastly devoted to the notion and reality of wilderness despite the many complications of that idea….Water, Smith writes, has a way of following the earth’s tectonic seams, of tracing its seismic cracks and fractures with minimal energy expended. Joined end to end, his stories reveal the work of a similar gravity. Their sum is tender explorations of faults – human, natural, and the fluent, ceaseless meeting of the two.”
— New York Times


“Mr. Smith is at his best when he describes the absurdity of what passes for daily life in the canyons….Nature Noir is a wonderful antidote to the treacly Ansel Adams image of our parks.”
— Wall Street Journal


“Jordan Fisher Smith, a California state park ranger for 14 years, whose Nature Noir offers a moving, evocative account of his efforts to protect the American River and its 42,000-acre watershed despite a federal government intent on drowning it with a dam….Smith’s narrative gracefully weaves scenes and stories with context, history and reflection, in ways recalling the best of John McPhee. But the voice here is his own, understated and nuanced….Nature Noir ends up being as much about human nature as Mother Nature.”
— The Los Angeles Times


“Fisher Smith’s book follows the tradition of nature writers such as Emerson, Thoreau, John Muir and Annie Dillard. But Nature Noir is no Emersonian ode to pastoral transcendentalism, nor is it a Muirian celebration of the sacred in the wilderness. The writer who most closely anticipates Fisher Smith’s themes is Joan Didion, who wrote, in 1977, ‘some of us who live in arid parts of the world think about water with a reverence others might find excessive.’ Fisher Smith would probably find nothing unusual about this obsession. Because for 14 years he worked the canyons of the American River, he lived under the daily specter of the ravine being flooded for a dam.”
— San Francisco Chronicle


“Nature Noir is a smart, magically written lament for a lost land….A nature book unlike any other. This nuanced, pain-wracked elegy for a lost land is at the same time infused with wonder, laced with heart-stopping descriptions of natural beauty and peppered with gritty, anti-romantic, all-too-real tales of cops ‘n’ bad guys in the great outdoors. Nature Noir will be shelved with Sand County Almanac, Silent Spring, The Monkey Wrench Gang and The End of Nature. And it will be taken off the shelf, and read, and reread.”
— San Diego Union Tribune


“Haunting….The clash of nature and civilization is a resonant theme….Smith writes with a novelistic sense of character, atmosphere and pacing, in a prose style that’s wonderfully evocative of landscape and its effects on people. It will cause readers to both thrill and shudder at the call of the wild.”
— Publishers Weekly


“A cross between Edward Abbey’s Desert Solitaire and any of Carl Hiaasen’s novels. Smith’s passion for this unruly stretch of wilderness and his outrage at its 150-year history of various depredations is heartfelt. But it is the bizarre, true-life characters that Smith encounters during his workdays—such as armed gold miners and drug-addled squatters (who don’t like to pay camping fees)—that make Nature Noir so readable.”
—Audubon


“Forget Smokey the Bear, scout troops, or fresh-scrubbed families harmonizing on campfire songs. Nature Noir: A Park Ranger’s Patrol in the Sierra, by Jordan Fisher Smith, gives entrée into a strange, dark, and mesmerizing outdoor world that’s absolutely unforgettable….Smith’s a brilliant writer….Daringly original and gorgeously nuanced, Nature Noir shows us the dark side of park rangering, but in doing so, Fisher makes us appreciate the startling beauty and power of the outdoors all the more.”
— The Boston Globe


“This book is so astonishing and fine that before its final page, I decided to buy two copies. One will go to my brother, a mountain man who rarely reads, and the other to an editor who reads all day long. The editor will enjoy Nature Noir for the structure of its 11 graceful, disturbing essays that build to a startling climax. My brother will recognize, instantly, a kindred sensibility in writer Jordan Fisher Smith, a California park ranger who tells his stories of rivers and canyons in an unsentimental, clear-as-snowmelt voice.”
— The Plain Dealer


“Smith tells engrossing stories, and he has a knack for weaving disparate narratives together….Smith echoes Edward Abbey’s righteous indignation in Desert Solitaire. Both books share evocative and descriptive writing, but Smith offers a fresh perspective on our threatened environment.”
— The Charlotte Observer


“Nature Noir, by turns is funny, poignant and surprising, is an intimate memoir of the career of a state-park ranger. Not just any ranger, but one with a wicked pen, patrolling a doomed landscape.”
— The Seattle Times


”Don’t let the title fool you. Jordan Fisher Smith’s extraordinary memoir isn’t’ some dark, one-note, wilderness-copes-and-robbers story. Sure, Smith recounts juicy details of the first-fights, suicides, and murder he investigated during his 14 years as a park ranger on California’s American River. But more than that, Nature Noir marks the debut of a terrific new nature writer, one whose penetrating, ranger’s-eye view of the Sierra Nevada recalls the plainspoken timbre of Edward Abbey and David James Duncan.”
— Outside


”Recounting 14 bizarre years a spark ranger in a Sierra Nevada wilderness, Smith kicks things off with an indelible image: a boozed-up nature lover lobbing a baby at a moving car. In Smith’s account, it’s a dead heat as to which was more malign: nature—with floods and through-choking droughts—or its guests. He writes about the natural world with more grace than anyone since Edward Abbey.”
— Newsweek


“Nature Noir is by far the best book written by or about the modern park ranger….Achingly beautiful….Often thoughtful and contemplative [Smith] shares his thoughts on man and nature.”
— The Bloomsbury Review


“Jordan Fisher Smith’s Nature Noir has miniseries pilot written all over it, and a wildfire of a series it would make…. Nature Noir is not only an electrifying tale of bringing the law to the wild west in 1980s and ‘90s but also a graphic piece of writing from someone who has learned his craft from the royalty of American naturalists: writers like Gary Snyder, Aldo Leopold and Edward Abbey.”
— Buffalo News


“This is a walk in the woods like Thoreau never imagined. I can't make up my mind whether Jordan Smith is John Muir at the crime scene or Elroy Leonard with a backpack. In any event, this astonishing book, with its brilliant interweaving of murder, irony and natural history, invents a new genre.”
— Mike Davis, author of Dead Cities


"Jordan Fisher Smith writes of the present moment as if from some vantage point in the future.  The effect is eerie, and part of what makes Nature Noir so compelling.  Smith's is a refreshingly unsentimental kind of truth-telling."
— Barry Lopez, author of Resistance and Of Wolves and Men


“Forest rangers have one of the tougher jobs our society has yet devised--they come up against all the varieties of human unhappiness that a city policeman encounters, and they come up against nature in all her moods. Both seem amplified in the canyon of the American River that Jordan Fisher Smith writes about with such calm power. This book will tell you things you didn't know, and in a strong and original voice.”
— Bill McKibben, author of Enough: Staying Human in an Engineered Age, and The End of Nature.