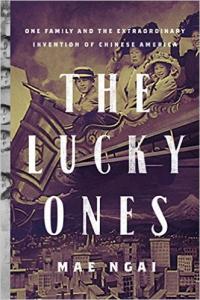 The Lucky Ones: One Family And The Extraordinary Birth Of Chinese America

If you're Irish American or African American or Eastern European Jewish American, there's a rich literature to give you a sense of your family's arrival-in-America story. Until now, that hasn't been the case for Chinese Americans. From noted historian Mae Ngai, The Lucky Ones uncovers the three-generational saga of the Tape family. It's a sweeping story centered on patriarch Jeu Dips' (Joseph Tapes') self-invention as an immigration broker in post-gold rush, racially explosive San Francisco, and the extraordinary rise it enables. Ngai's portrayal of the Tapes as the first of a brand-new social type?middle-class Chinese Americans, with touring cars, hunting dogs, and society weddings to broadcast it?will astonish.


“Fascinating… With meticulous research into the Tapes’ daily lives, [Ngai] sheds light on the choices certain family members made to secure a future for themselves and their children.”
—Los Angeles Times


“A fresh portrait of Chinese immigrants, America and the past century… deceptively novelistic and evocative… an absorbing story.”
— New York Times Book Review


“American history is a far bumpier ride than it used to be in the good old days. Mae Ngai is far more interested in the complications of history than the myths. The pathway to the American Dream was not linear, she writes, a neat journey from exclusion to inclusion. Hard work and perseverance were not all it took, much as we might like to believe it. And immigrants did not always pull each other up onto the golden mountain. In this fascinating book, Ngai tells the story of three generations of the Tape family, beginning with Joseph Tape (Jeu Dip) and his young wife, Mary (whose Chinese name was lost in the immigration and upbringing in a San Francisco orphanage). Jeu Dip came alone to the United States when he was 12. He became a successful immigration interpreter and broker. Mary insisted on not raising their children in Chinese-only neighborhoods and fought to have their 8-year-old daughter Mary study in a white public school. Joseph and Mary and the next two generations of Tapes survived by finding the 'cracks in the edifice of exclusion.' With meticulous research into the Tapes' daily lives, she sheds light on the choices certain family members made to secure a future for themselves and their children; staking a claim to a small piece of the American Dream.”
—Los Angeles Times


“Through…documents and through outstanding sleuthing in public records, Ngai has put together an intriguing chronicle of an exceptional family. Even better, she…illuminate[s] the experiences of all Chinese immigrants in the troubled era of the Exclusion Act.”
— Book Page


"The Lucky Ones skillfully interlaces American and Chinese American history with the three-generation story of the San Francisco-based Tape family, which started its American experience before the draconian Chinese Exclusion Act of 1882.”
—San Francisco Chronicle


“Mae Ngai tells a story we haven’t heard, and very much need:  This history that is not his-tory, or her-story, but our-story. Provocative, groundbreaking, and revelatory, The Lucky Ones is a great read, to boot—as pleasurable as it is enlightening.”
—Gish Jen, author of Typical American, Mona in the Promised Land, and The Love Wife