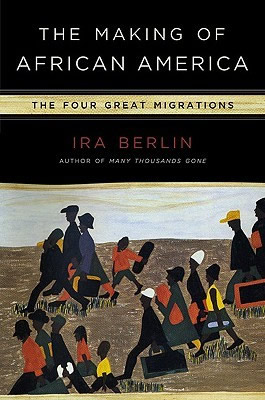 The Making of African America: The Four Great Migrations

A leading historian offers a sweeping new account of the African American experience over four centuries.

Four great migrations defined the history of black people in America: the violent removal of Africans to the east coast of North America known as the Middle Passage; the relocation of one million slaves to the interior of the antebellum South; the movement of more than six million blacks to the industrial cities of the north and west a century later; and since the late 1960s, the arrival of black immigrants from Africa, the Caribbean, South America, and Europe. These epic migraÂ­tions have made and remade African American life.

Ira Berlin's magisterial new account of these passages evokes both the terrible price and the moving triumphs of a people forcibly and then willingly migrating to America. In effect, Berlin rewrites the master narrative of African America, challenging the traditional presentation of a linear path of progress. He finds instead a dynamic of change in which eras of deep rootedness alternate with eras of massive moveÂ­ment, tradition giving way to innovation. The culture of black America is constantly evolving, affected by (and affecting) places as far away from one another as Biloxi, Chicago, Kingston, and Lagos. Certain to garÂ­ner widespread media attention, The Making of African America is a bold new account of a long and crucial chapter of American history.

Reviews:
“The Making of African America is the result of prodigious scholarship and synthesis in tracking down the ways that a people held themselves together as they were swept into bondage and out of it and driven from place to place. Berlin has earned the credentials for telling their story, for it rests on his earlier demonstration that slavery could not eradicate the capacities for self-preservation and self-expression that make human beings human.”
—New York Review of Books


“What Berlin has produced, with careful research, keen interpretation, and accessible language, is a worthy complement to Franklin’s narrative, just as he intended.”
—Boston Globe


“A sweeping new account of the African-American experience over four centuries…His latest tome is sure to garner widespread media attention as a bold new account of a long and crucial chapter of American history.”
—Philadelphia Tribune


“Berlin (Many Thousands Gone) offers a fresh reading of American history through the prism of the “great migrations that made and remade African and African American life.”  Movement is a matter of numbers, and Berlin provides them in detail kept fully readable by his attention to the cultural products of the shifts. Berlin's careful scholarship is evidenced in his rich notes; the ordinary reader will be pleased by the fluidity and clarity of his prose.”
—Publisher's Weekly


“A succinct study of how the migrations of African Americans, from the slavery era to the present, affected the development of black culture in America… An insightful meditation on the physical and cultural journeys of African-Americans in the United States.”
—Kirkus Reviews