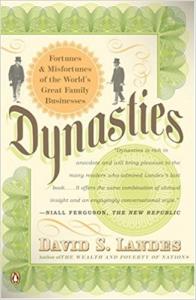 Dynasties: Fortunes And Misfortunes Of The World's Great Family Businesses

From the author of the New York Times bestseller The Wealth and Poverty of Nations, a fascinating look at the crossroads of kin and coin

David S. Landes has earned a reputation as a brilliant writer and iconoclast among economic historians. In his latest acclaimed work, he takes a revealing look at the quality that distinguishes a third of today's Fortune 500 companies: family ownership. From the banking fortunes of Rothschild and Morgan to the automobile empires of Ford and Toyota, Landes explores thirteen different dynasties, revealing what lay behind their successes-and how extravagance, bad behavior, and poor enterprise brought some of them to their knees. A colorful history that is full of surprising conclusions, Dynasties is an engrossing mix of ambition, eccentricity, and wealth.

Reviews:
“An economic historian examines the divergent legacies of eleven powerful business families. Although today’s conventional management wisdom looks askance at the family firm, Landes argues that it is crucial as a business model, both for its inherent stability and for the powerful example it offers entrepreneurs in the developing world.”
—The Atlantic Monthly


“David S. Landes is one of our best historians of industry and technology…. Landes’s characteristic insight and caustic wit brighten oft-told tales…. For Landes, “Dynasties” was clearly a pleasurable undertaking, not a scholarly one, and general readers may enjoy it for precisely that reason.”
—New York Times Book Review


“It’s a commonplace assumption of modern capitalism that most families outgrow the businesses they start. You get one up and running and after a generation or two, you have to call in the professional managers.  In his new book, “Dynasties,” historian and economist David S. Landes argues that this truism isn’t necessarily so. Families hold onto their firms a lot longer than you might suspect. And, for capitalism, it’s a good thing too.”
— Los Angeles Times


“Econoic historian Landes (history & economics, emeritus, Harvard; The Wealth and Poverty of Nations) offers a lively although very loosly organized analysis of 11 major global family businesses and the personalities involved in their successes and challenges…. This overview, complete with family sagas, is interesting, but readers who want more substance and structure could read particular biographies…”
— Library Journal


“Beginning as a work of economics, moving through soap opera and finishing as history, this book tells the stories of 11 great family businesses in Europe, Japan and America with at least three generations of family control….His emphasis is on how family considerations such as authority, love, trust, envy, marriage, adoption, and succession determine the growth and direction of the business.  While this may seem irrational compared to entrusting strategic decisions to specialized professionals selected according to talent rather than bloodline, Landes argues that family does a better job.”
— Publishers Weekly


“David Landes’ last book, The Wealth and Poverty of Nations, displayed the magisterial talents of the mature historian drawing on the reading and experience of a lifetime. In Dynasties, Landes adopts a narrower canvas – the achievement of great business families. But he brings to his new book many of the qualities that made Wealth and Poverty both a critical and popular success: breadth of knowledge, an instinct for the telling anecdote and pithy quotation, and a fluent and easy style bordering on the colloquial…This book is written, and reads, as a series of fascinating and individual stories, and can be sufficiently enjoyed for its gripping account of some of the most significant, and intriguing, figures in modern business.”
—Financial Times


“The title is alluring, the subtitle only adding to the sense of temptation. It is difficult not to be intrigued by the stories of great business families such as the Rothschilds, Morgans, Rockefellers, Toyodas, and Agnellis. They have helped to shape the world as we know it, enjoyed wealth beyond imagination and often lived highly colorful lives, whether by virtue or extraordinary frugality (JD Rockefeller) or flamboyant luxury (Gianni Agnelli).”
—The Guardian


“For a grand tour of historica family businesses from the Fords to the Rothschilds, there’s Dynasties.”
—Atlanta Journal Constitution


“Dynasties evokes the true grit of families active in three industries. Landes briskly chronicles the storied banking houses of the Barings, Rothschilds and Morgans; traces the automotive age throught he Fords, the Peugeots and others; and recalls the luck, brains and faith of those who exploited natural resources, from the Rockefellers to the Guggenheims.  If this sounds like a dry treatise on corporate governance, guess again. These are tales of plucky upstarts, tenacious heirs and moneyed grandchildren who prefer breeding horses and building museums to plotting corporate strategy.  Landes displays a storyteller’s zest for detail…. Vive la famile.”
— Bloomberg.com

“Landes may be a Harvard professor emeritus, but this book on the most powerful family businesses isn’t dry…. Although Landes includes business recommendations, the book is most successful at telling the stories behind the famous names.”
—AudioFile