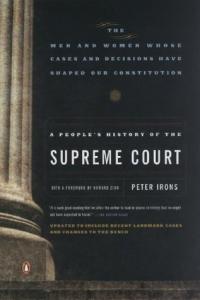 A People's History of the Supreme Court: The Men and Women Whose Cases and Decisions Have Shaped OurConstitution

Recent changes in the Supreme Court have placed the venerable institution at the forefront of current affairs, making this comprehensive and engaging work as timely as ever. In the tradition of Howard Zinn's classic A People's History of the United States, Peter Irons chronicles the decisions that have influenced virtually every aspect of our society, from the debates over judicial power to controversial rulings in the past regarding slavery, racial segregation, and abortion, as well as more current cases about school prayer, the Bush/Gore election results, and "enemy combatants."   A comprehensive history of the people and cases that have changed history, this is the definitive account of the nation's highest court.

Reviews:
“Irons combines careful research with a populist passion. In doing so, he breathes abundant life into old documents and reminds readers that today’s fiercest arguments about rights are the continuation of the endless American conversation.”
—Publisher's Weekly


“Irons is at his best when he focuses on those litigants before the Court who were outsiders seeking empowerment: people like Fred Korematsu, who challenged the evacuation of Japanese-American during WWII, or Homer Plessy, who in 1892 had the audacity to ride in a Louisiana railroad car reserved for white passengers.”
—Kirkus Reviews


“Like ‘A People’s History of the United States,’ Irons’ Supreme Court history is bracing and ultimately exciting to read as he builds up steam and indignation.”
—San Francisco Chronicle