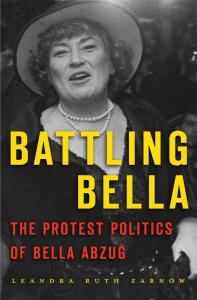 Bella Abzug’s promotion of women’s and gay rights, universal childcare, green energy, and more provoked not only fierce opposition from Republicans but a split within her own party. The story of this notorious, galvanizing force in the Democrats’ “New Politics” insurgency is a biography for our times.

Before Alexandria Ocasio-Cortez, Elizabeth Warren, or Hillary Clinton, there was New York’s Bella Abzug. With a fiery rhetorical style forged in the 1960s antiwar movement, Abzug vigorously promoted gender parity, economic justice, and the need to “bring Congress back to the people.”

The 1970 congressional election season saw Abzug, in her trademark broad-brimmed hats, campaigning on the slogan “This Woman’s Place Is in the House—the House of Representatives.” Having won her seat, she advanced the feminist agenda in ways big and small, from gaining full access for congresswomen to the House swimming pool to cofounding the National Women’s Political Caucus to putting the title “Ms.” into the political lexicon. Beyond women’s rights, “Sister Bella” promoted gay rights, privacy rights, and human rights, and pushed legislation relating to urban, environmental, and foreign affairs.

Her stint in Congress lasted just six years—it ended when she decided to seek the Democrats’ 1976 New York senate nomination, a race she lost to Daniel Patrick Moynihan by less than 1 percent. Their primary contest, while gendered, was also an ideological struggle for the heart of the Democratic Party. Abzug’s protest politics had helped for a time to shift the center of politics to the left, but her progressive positions also fueled a backlash from conservatives who thought change was going too far.


"Abzug’s career has been the subject of a lot of books over the years, and Zarnow focuses on her progressive politics rather than her persona."
—The New York Times

“Zarnow sketches a vibrant picture of Abzug’s tumultuous era and draws apt comparisons between her firebrand subject and the latest crop of progressive congresswomen.”
—Publishers Weekly

“A compelling portrait of a woman who pursued her goals with a single-minded intensity that is inspiring, perhaps all the more so owing to the focus on Abzug’s home life and marriage, which was equal in a way that is unusual even today…A fascinating ride through some of the fastest-paced politics of the 1960s with a larger-than-life character.”
—Kirkus Reviews

“Bella Abzug speaks to our times from this well-wrought biography by historian Leandra Zarnow. Abzug knew progressive change is a not a sprint but a lifetime struggle in which racial and gender equity, economic justice, and peace belong together.”
—Nancy MacLean, author of Democracy in Chains: The Deep History of the Radical Right’s Stealth Plan for America

“Readers struggling against the current subversion of freedom and democracy in the U.S. and abroad will find in ‘Battling Bella’ a member of the resistance worthy of rediscovery.”
—Jane Sherron De Hart, author of Ruth Bader Ginsburg: A Life

“Zarnow has produced a compelling account of a powerful female politician who fought for peace, racial justice, and gender equality.”
—Estelle B. Freedman, author of No Turning Back: The History of Feminism and the Future of Women

”Battling Bella is political biography at its best.”
— Marjorie Spruill, author of Divided We Stand: The Battle Over Women’s Rights and Family Values That Polarized American Politics.