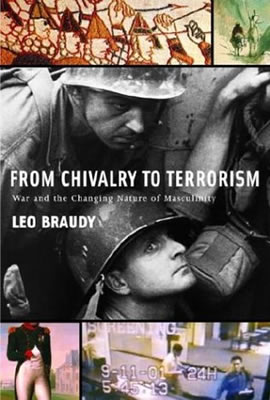 From Chivalry to Terrorism: War and the Changing Nature of Masculinity

Manliness has always been linked to physical prowess and to war; indeed the warrior has been the archetypal man across countless cultures throughout time. In this magisterial excursion through literature, history, warfare, and sociology, one of our most prominent scholars tracks the complex relationship between the changing methods and goals of warfare and shifting models of manhood. This journey takes us from the citizen soldiers of ancient Greece to the medieval knights to the misogynistic terrorists of Al Qaeda.

As he chronicles these transformations, Leo Braudy weighs the significance of everything from weapon technology to the hairstyles favored during different eras. He offers fresh insights on codes of war and codes of racial purity, and on cultural and historical figures from Socrates to Don Quixote to Napoleon to Custer to Rambo. Epic in scope and free of academic jargon, From Chivalry to Terrorism is a masterwork of scholarship that is both accessible and breathtakingly ambitious.

Reviews:
"From Chivalry to Terrorism is a vivid, hugely ambitious book, which synthesizes a great deal of material on the early modern and modern West explicitly for the benefit of ‘curious amateurs.’ As such, one of its virtues is that it draws attention to some recurrent patterns of behavior and belief.”
—New York Review of Books


“He has a terrific topic, one examined, imaginatively by many scholars but never before so sweepingly, and the book displays Braudy’s loving immersion in his subject, fine grasp of historical complexity and aversion to glob or dogmatic judgments…Braudy brilliantly dissects how essential masculinity and war have been to each other.”
—New York Times Book Review


“Dense and intricately argued, this is history in the grand manner, pulled off with brilliance, wonderful imagination and considerable erudition. Braudy brings such an omnivorous intelligence to his task [and] shows how contingent upon time and place, how unstable and various our definitions of masculinity have been – and how many men, as well as soldiers, have fallen outside them.”
—Washington Post


“From Chivalry to Terrorism is history at its most powerful. It is impossible to do justice to the range of fascinating material in this book...This series of interpretive essays is empathetic, analytical history at its best and most lively, [and] most readers will simply be overwhelmed by the sheer scholarship. Those who persevere will find Braudy to be one of the most exciting chroniclers of war’s history.”
—Los Angeles Times


“Braudy again distinguishes himself as one of our most valued, and most readable, historians. With The Frenzy of Renown and From Chivalry to Terrorism behind him, one can only wonder what sprawling subject the good professor will take on next.”
—San Fransisco Chronicle


“Apparently uncomfortable with small themes, Braudy…sets out on an uncommonly ambitious task to ‘outline a history of the intertwined ideas of war and masculinity since the Middle Ages’…turning up fascinating tidbits across time about the transformative effects of war across human society…his learned explorations are wonderfully engaging and provocative. A first-class work of cultural history, thoroughly impressive in scope and skill.”
—Kirkus Reviews